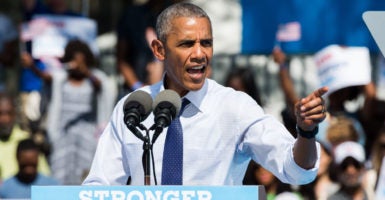 Then-President Barack Obama stumps for Hillary Clinton in Philadelphia on Sept. 13, 2016, one week after an FBI lawyer texts an FBI counterintelligence official that Obama “wants to know everything we’re doing” on an unspecified case. (Photo: Michael Brochstein/Zuma Press/Newscom)

Barack Obama figures prominently in the newly released chain of electronic text messages between an FBI counterintelligence official and a bureau attorney who both expressed antipathy toward Donald Trump during the 2016 presidential campaign.

In a Sept. 2, 2016, text message to Peter Strzok, deputy assistant director of the FBI’s counterintelligence division, FBI lawyer Lisa Page suggests that, as president, Obama was tracking the progress of one or more cases.

She was in the process of crafting talking points for then-FBI Director James Comey, Page texted Strzok, because “potus wants to know everything we’re doing.”

“POTUS” has become a widely used acronym for president of the United States.

The Republican majority on the Senate Homeland Security and Governmental Affairs Committee produced a report, “The Clinton Email Scandal and the FBI’s Investigation of It,” detailing major findings in the previously unseen text messages. The committee made them available for public consumption, Fox News first reported early Wednesday.

Because the FBI officially wrapped up its investigation of Hillary Clinton’s use of a private email server as secretary of state without bringing charges in July 2016, it’s not clear to what “everything” Page was referring.

By Sept. 2, Trump and Clinton were locked in a bitter contest for the White House that ended with Trump’s victory Nov. 8 to succeed Obama. In late October, 11 days before the election, Comey did briefly reopen the FBI investigation over newly discovered Clinton emails.

As president, Obama had said in an April 2016 interview on “Fox News Sunday” that he could “guarantee” that his administration would not seek to influence “any” pending FBI or Justice Department investigation.

When Fox’s Chris Wallace, the show’s host, asked the president if he could guarantee Clinton would not be afforded special treatment in the FBI probe of  her use of a private email server to conduct  government business while his secretary of state, Obama said:

I guarantee that there is no political influence in any investigation conducted by the Justice Department, or the FBI, not just in this case, but in any case.

The text messages between Strzok and Page, who reportedly were having an affair at the time, first came to light as the Department of Justice’s Office of Inspector General conducted an internal review of the FBI’s probe of the Clinton email scandal.

Comey, who would be fired by President Trump in May 2017, cleared Clinton of any criminal activity in a widely analyzed press conference four months before the election, on July 5, 2016.

The Justice Department produced a “first tranche” of the Strzok-Page text messages on Dec. 12 and Jan. 19 in response to a written request from Sen. Charles Grassley, R-Iowa, chairman of the Judiciary Committee, and Sen. Ron Johnson, R-Wis.,  chairman of the Homeland Security and Governmental Affairs Committee.

Their report says the text messages raise questions of whether:

—Personal animus and/or political bias influenced the FBI’s actions with respect to Trump and his campaign or transition officials.

“We should all recognize the harm done to our rule of law when crimes go unpunished because government officials look the other way for the wealthy, famous, or powerful,” the Senate report says, adding:

Americans rightly expect a single and impartial system of justice for all, not one for the well connected and a separate one for everyone else. The information available to the committee at this time raises serious questions about how the FBI applied the rule of law in its investigation of classified information on Secretary Clinton’s private email server.

The Sept. 2, 2016, text message from Page to Strzok that mentions Obama’s wanting “to know everything” is one of more than 50,000 texts the two FBI officials exchanged during a two-year extramarital affair, the Daily Mail reported.

The dates of the text messages range from August 2015 to December 2016, according to The Washington Times and other media outlets that obtained copies.

As The Daily Signal and other outlets previously reported, Page and Strzok exchanged derogatory messages about Trump in text messages that already have come to light, referring to him as an “idiot” during the Republican primary season.

In other exchanges, Page and Strzok made it clear that they supported Clinton over Sen. Bernie Sanders, I-Vt. in the Democrats’ primary contest.

“It just further shows that there is reason for all of us to have great cause for concern in this process, and we hope that it’s more thoroughly and fully looked at as we move forward,” Sanders said.

Asked whether she believes Obama was involved in an FBI investigation, she said:

I’m not aware of that specific concern, but I think that there is a lot within those text messages that gives us great cause for concern. And we, again, hope that they look at them thoroughly and investigate this process more fully.

Republican lawmakers noted that Strzok was lead investigator in the probe of Clinton’s secret email setup, and identified him as the FBI official who urged Comey to use the words “extremely careless” rather than the legally weighted “grossly negligent” to describe Clinton’s email practices as secretary of state.

Last July, special counsel Robert Mueller removed Strzok from his team investigating Russian interference in the election after learning of the text messages.

Page, the FBI lawyer, also served on Mueller’s investigative team, but by the time Inspector General Michael E. Horowitz’s probe uncovered her text messages with Strzok, she had returned to other duties at the FBI.