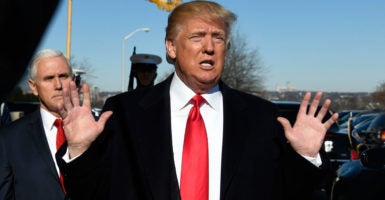 Coming up on one full year in office, President Donald Trump is faced with the prospect of a government shutdown forced by Congress—even as the first year of his presidency is marked by both demonstrable accomplishments and incompletes on the economy, national security, and health care.

“If for any reason [the government] shuts down, the worst thing is what happens to our military,” Trump said Thursday during a visit to the Pentagon.

Trump also noted his economic accomplishments, citing news that Apple will expand and give most employees bonuses because of the new Republican-crafted tax law, which he said Democrats hope to derail with the shutdown threats.

Trump hailed Apple’s plan to invest $350 billion in the United States because of tax reform and create 20,000 new U.S. jobs.

“So our tax cuts and our tax reform have turned out to be far greater than anyone ever anticipated,” Trump said. “I’m sure the Democrats would like to blunt that by shutting down government.”

On the “incomplete” side: Trump didn’t start construction on a border wall along the border with Mexico—a multibillion-dollar project he is demanding in spending negotiations with Congress.

He also didn’t get a bill repealing and replacing Obamacare out of Congress. The tax bill, however, chopped out Obamacare’s mandate that all individuals buy health insurance.

But besides the initial economic payoff of tax reform law, the Trump administration is showing progress on enforcing immigration law and battling terrorists.

At the one-year mark Saturday, here’s a look at how Trump has performed in seven key areas.

In the week Trump logs his first full year in office, the Dow Jones Industrial Average hit a record high of 26,000 after a year of strong job growth and, more recently, wage increases.

I promised that my policies would allow companies like Apple to bring massive amounts of money back to the United States. Great to see Apple follow through as a result of TAX CUTS. Huge win for American workers and the USA! https://t.co/OwXVUyLOb1

At least 164 companies so far have announced bonuses or raises for a combined total of more than 2 million employees, according to data from the group Americans for Tax Reform.

The tax reform legislation, which cut rates and closed loopholes, represents the first overhaul of the tax code since the 1986 changes signed into law by President Ronald Reagan.

The U.S. economy, as measured by gross domestic product, also grew by more than 3 percent for the second and third quarters of 2017. Through most of the Obama administration, the economy grew at 2 percent.

The unemployment rate fell to 4.1 percent, a 17-year low, while 13 states hit record low unemployment, according to the White House.

The White House asserts that its deregulation drive—which amounts to ditching 22 regulations for every one added—has saved the economy $8.1 billion in compliance costs.

Although Trump didn’t sign other big pieces of legislation during his first year, he signed 15 bills under the Congressional Review Act that rolled back Obama administration regulations that conservatives consider stifling to economic growth.

Trump also withdrew the United States from the Obama administration’s Paris climate accord, which NERA Economic Consulting projected could have cost the U.S. economy nearly $3 trillion and 6.5 million industrial sector jobs by 2040.

In other areas, Trump’s still trying.

Trump didn’t begin substantial construction of a wall at the southern border. Nor did his administration deport all 11 million-plus illegal immigrants, as he had suggested during the campaign.

In legal flux is the administration’s “extreme vetting” policy temporarily blocking travel from terrorism-prone countries that have unstable governments and don’t have sufficient security to share information with U.S. officials.

Some critics of the policy called it a Muslim ban right off the bat. The administration altered the list of affected countries to include nations such as North Korea and Venezuela along with Iran, Syria, Libya, Chad, Somalia, and Yemen.

In early December, the U.S. Supreme Court ruled that the full travel ban could take effect, and that lower court rulings blocking it should be put on hold while the policy works its way through the appeals process.

However, in late December, the 9th U.S. Circuit Court of Appeals partially blocked the travel restrictions, asserting that Trump exceeded his authority. Because of the earlier high court ruling, the 9th Circuit ruling won’t have an immediate impact.

Also yet to be determined is what happens with the Obama administration program called Deferred Action for Childhood Arrivals, or DACA.

In September, Trump reversed Obama’s 2012 executive action shielding from deportation, and allowing work permits for, about 800,000 illegal immigrants brought to the United States as minors.

However, Trump gave Congress until March to figure out a legislative solution. Now, though, Democrats in Congress seek to require amnesty for these so-called “Dreamers” in exchange for their votes for a continuing resolution to keep the government open.

The Trump administration can point to several areas of demonstrated progress on the immigration front.

The administration rescinded another Obama executive action, the 2015 Deferred Action for Parents of Americans, which had shielded almost 5 million illegal immigrants, the parents of “Dreamers,” from deportation. Lower courts had held the Obama administration action was unconstitutional.

The Trump administration’s Justice Department announced it would withhold federal grants from sanctuary jurisdictions, those that refuse to cooperate with federal enforcement of immigration laws.

From Trump’s first day in office through the end of fiscal year 2017 on Sept. 30, Immigration and Customs Enforcement made 110,568 arrests of illegal immigrants, a 40 percent increase over the same period the year before.

More than 92 percent of illegal immigrants arrested by ICE had criminal convictions, were fugitives, or had illegally re-entered the country. The agency also arrested 36 percent more criminal gang members in fiscal year 2017 compared to the year before.

Trump also made significant progress in lower federal courts, with a record of 12 circuit court judges confirmed by the Senate in the first year.

Still, only 22 of Trump’s 73 nominations to lower courts were confirmed by the end of 2017.

Although Senate Republicans often draw criticism for lack of action, some conservative court watchers such as Carrie Severino, chief counsel for the Judicial Crisis Network, applauded Trump and Senate leadership for the confirmations.

“One of the greatest and most lasting successes of President Trump’s first year was appointing a record number of highly qualified judicial nominees,” Severino said in a public statement last week. “President Trump is keeping his campaign promise to fill the federal bench with brilliant judges who follow the Constitution, and thanks to the strong leadership of Senate Majority Leader Mitch McConnell, they are being confirmed by the Senate.”

Aside from tax reform, one of the most sweeping bills Trump signed in his first year was the Veterans Affairs Accountability and Whistleblower Protection Act, which allows senior officials in the Department of Veterans Affairs to fire failing employees and establish safeguards to protect whistleblowers.

The action followed the VA’s waiting list scandal of 2014, in which veterans died while waiting for medical care. An inspector general’s report found that agency employees altered documents and officials held few accountable, largely because of civil service protections.

After Trump signed the accountability bill into law, the department fired 1,298 employees, suspended 425, and demoted 73, the White House said.

Trump also created a new White House hotline for veterans staffed by veterans and family members. A new program called Anywhere to Anywhere VA Health Care allows providers to use “telehealth” technology to serve veterans no matter the location of the provider or veteran.

In Trump’s first year, administration officials note, the Islamic State, the brutal terrorist army operating in Iraq and Syria, lost nearly all of its territory.

A government shutdown will be devastating to our military…something the Dems care very little about!

Trump campaigned on avoiding foreign entanglements. But Secretary of State Rex Tillerson said Wednesday that U.S. forces would remain in Syria even after the final defeat of the Islamic State, or ISIS, to ensure neither Syrian dictator Bashar Assad nor the Iranian government seize control of the territory the group once controlled.

During a May meeting with leaders of the North Atlantic Treaty Organization, or NATO, Trump helped develop an agreement for allies to increase spending on national defense spending to combat ISIS more effectively and be more in line with NATO commitments.

North Korea continues to be a nuclear threat, but the Trump administration won adoption of a tough new United Nations Security Council resolution.

The administration increased sanctions on North Korean entities as well as Chinese financial institutions that aid dictator Kim Jong Un’s regime. Trump, who worried some observers by ridiculing Kim as “Rocket Man” on Twitter, also redesignated the communist regime as a state sponsor of terrorism.

Trump did not withdraw from the deal that Obama struck with Iran to delay its development of nuclear weapons, but signaled that he wanted both allies and Congress to assist in putting more teeth and accountability in the deal. Earlier this month, he chose not to reimpose sanctions in place before the deal.

Early in his campaign, Trump lacked the complete trust of pro-life activists because of previous stated positions accepting the easy availability of abortion.

But the president planned to cap his first year in office Friday by becoming the first president to deliver a livestream address, from the White House, to the annual March for Life event in Washington.

During his first week, Trump reinstated the so-called Mexico City policy, preventing $9 billion in foreign aid from being used to fund abortions abroad. The existence of the policy historically has ping-ponged back and forth between Republican and Democratic presidents.

Among the deregulation actions signed by Trump under the Congressional Review Act was one overturning an Obama administration rule put in place after Trump’s election but before his inauguration. The rule prohibited states from defunding abortion providers such as Planned Parenthood.

Trump pledged during the campaign to unleash U.S. energy resources.

The Trump administration also directed the Environmental Protection Agency to rescind the Obama administration’s Clean Power Plan. That policy would have increased electricity rates by as much as 14 percent and cost American households up to $79 billion, NERA Economic Consulting estimated.