9 Insights on the F-35A From 31 Experienced Fighter Pilots 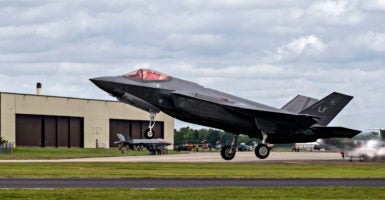 Air Force Gen. Herbert “Hawk” Carlisle, commander of Air Combat Command, this week declared the F-35A fighter jet ready for combat. While many pundits and politicians have questioned the worth of this jet, the only people who know the ground truth are the pilots themselves.

A total of 174 U.S. pilots currently have been trained to fly Lockheed Martin’s F-35A Lightning II. The Heritage Foundation  recently interviewed 31 of these former F-15C, F-15E, F-16C, and A-10 pilots.  Each expressed a high degree of confidence in the F-35A, their new fifth-generation platform.

Here are nine insights gleaned from those conversations:

1. Even with developmental restrictions that limit the F-35A’s responsiveness and ability to maneuver, every U.S. fighter pilot interviewed would pick the F-35A over his former jet in a majority of air-to-air (dogfight) engagement scenarios they could face.

3. A former F-16C instructor—and graduate of the Air Force Weapons Instructor Course of “Top Gun” fame—said the jet is constrained on how tight it can turn (G-limited) now. But even so, the rudder-assisted turns are incredible and deliver a constant 28 degrees of turn a second. When the Air Force removes the restrictions, this jet will be eye watering.

5. The F-35A’s radar effectively can shut down enemy fighter and surface-to-air radars without those adversaries becoming aware they are being electronically attacked. Coupled with stealth, this jet is all but invisible to enemy radars.

7. The research and development that went into the stealth skin of the F-35A removed the high-maintenance and sortie-limiting requirements associated with the radar-absorbing skin of the F-22, F117, or B-2. Stealth does not limit the F-35A’s ability to fly multiple combat or training sorties each day.

8. Bringing all the tactical sensors of the F-35A into a single display (sensor fusion) is still not optimized, and most pilots complained of “ghosts” or multiple displayed contacts for the same threat.

Concurrent development of the F-35A certainly has had its challenges, and the risks for delays and cost overruns should have been factored into the acquisition process. They were not.

The biggest single factor in keeping the program on time and under budget is effective, stable leadership.  That leadership is now in place and the United States is on the precipice of delivering arguably the freshest, most advanced fighter technology ever fielded.

The gains and contracting lessons gleaned through concurrent development of the F-35A program are significant. The Pentagon needs to apply them to every major acquisition program for technology and systems that are susceptible to fielding obsolescence.

>>> Read the full results of the Heritage study here.