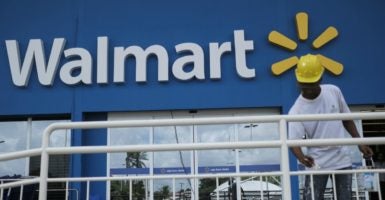 Wal-Mart announced Thursday it will raise its starting wage to $11 per hour and will give employees a bonus of up to $1,000, crediting the tax cuts signed into law Dec. 22 by President Donald Trump.

Wal-Mart President and CEO Doug McMillon said in a statement the retail giant was “pleased” to announce the wage increase, which will take place beginning in February and will benefit more than 1 million Wal-Mart, Sam’s Club, eCommerce, logistics, and home office employees.

The bonuses will be based on the length of employment, with a minimum of $200 for employees with less than two years of experience working at Wal-Mart and a maximum of $1,000 for employees who have worked there for more than 20 years.

The payouts should total around $400 million, according to CNBC.

“Today, we are building on investments we’ve been making in associates, in their wages and skills development,” he said. “It’s our people who make the difference, and we appreciate how they work hard to make every day easier for busy families.”

McMillon added that Wal-Mart is “early in the stages of assessing the opportunities tax reform creates” for it to invest in its customers and associates to “further strengthen” its business.

“Tax reform gives us the opportunity to be more competitive globally and to accelerate plans for the U.S.,” he said, adding that the retailer is especially excited to invest in new technologies to help customers and employees alike.

Trump responded to the announcement by saying it’s “[g]reat news,” adding that it is “a result of our TAX CUTS & JOBS ACT!”

Great news, as a result of our TAX CUTS & JOBS ACT! pic.twitter.com/SLvhLxP3Jl

“Families are a priority to us, and connecting with and caring for a new family member is obviously important,” McMillon said.

Prior to these changes, paid maternity leave was eight weeks and paid parental leave was four weeks for full-time hourly workers.

“I’m proud of our progress, and we have momentum. Let’s build on that in 2018,” McMillon said.