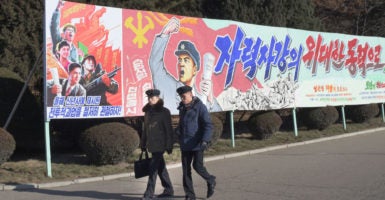 Over the last 15 years, North Korea has topped the list of the world's "Most Dangerous Places to Be a Christian." (Photo: Reporters/ZUMA Press/Newscom)

As if North Korea weren’t taking up enough headlines, Open Doors USA just added another one: Kim Jong Un’s country is topping the list of the world’s “Most Dangerous Places to Be a Christian.”

Of course, the distinction is nothing new for the regime, which has owned the No. 1 spot for the last 15 years. “Nearly one of every 12 Christians in the world today lives in an area, or in a culture, in which Christianity is illegal, forbidden, or punished,” Open Doors President David Curry explained. In North Korea, where 50,000 people are suffering in prison or labor camps for their faith, few are surprised.

What is surprising, experts say, is the alarming new trend in places like Afghanistan. The struggling country, which is a routine offender on the list, climbed into the second worst spot—a frustrating development for nations like America that continue to pour resources and troops into the area. Even in the Bush years, religious liberty was a problem in the area.

As Open Doors points out, Islamic extremism is the biggest driver of persecution, “initiating oppression and conflict in 35 of the 50 countries on the list.” Now, with reports that Pakistan has been aiding Muslim radicals in Afghanistan, we’re starting to see the effects. President Donald Trump, to his credit, cut off aid to Pakistan, one of our supposed “allies” in the region, hoping he could persuade it to stop giving “safe haven to the terrorists we hunt in Afghanistan.”

Amazingly, “Afghanistan and North Korea are nearly tied. Never before,” Curry told reporters, “have the top two countries been so close in incidents. Both countries are extreme in intolerance and outright persecution of Christians in every area Open Doors monitors. Afghanistan now meets the same level of persecution as North Korea in five out of six areas. This is a tragedy considering the efforts being made by the international community to help rebuild Afghanistan are failing to ensure freedom of religion.”

Radical Islamists continue their march of savagery through most of the Middle East and Africa, burning schools and villages to the ground in their war against non-Muslims.

Pakistan, meanwhile, the accomplice to Afghanistan’s rise to infamy, scored the highest in “churches or church building attacks, abductions, and forced marriages.”

The Trump administration, which has done an admirable job cleaning up Iraq and driving the Islamic State out of the country, has another hill to climb in the surrounding nations. The problems of violence and extremism, which have mushroomed in the last decade, point back to President Barack Obama’s failures as an international leader—not only on terrorism, but religious liberty.

As we’ve said before, America’s silence under the last administration led to a rise in the global threat that Trump is now working furiously to control. Conservative leaders like former Rep. Frank Wolf spent the better part of Obama’s two terms begging him to get off the sidelines and defend the persecuted church. But if the president wouldn’t recognize the First Freedom of Americans here at home, how could he fight for the world’s? Fortunately, the new White House has no interest in tip-toeing around the issue of persecution.

Trump has been a staunch advocate for freedom, even going so far as to nominate Kansas Gov. Sam Brownback to take over as ambassador-at-large for religious liberty. In the coming weeks, Vice President Mike Pence will build on the new administration’s agenda, visiting the Middle East and asking for other leaders’ cooperation in the fight.

For now, Family Research Council’s Travis Weber says, the Open Doors watch list should serve as “a reminder to all of us in the United States to never take our freedom for granted. Indeed, we must use our freedom to advocate for freedom of religion for all around the world, even as we guard against its infringement here at home.”