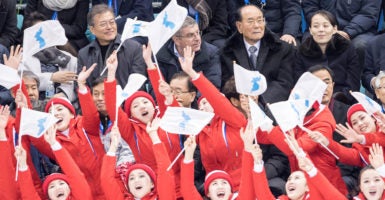 When North Korea announced it would be participating in this year’s winter Olympics in South Korea under a joint flag with the South, it was clear that some would attempt to “normalize” the regime.

The speed at which the American media lapped up North Korean propaganda in the first weekend of the Olympics was stunning. Almost all of the major news networks and publications ran glowing profiles of North Korean dictator Kim Jong Un’s sister, Kim Yo Jong, who has attended the games.

CNN, Reuters, and others jumped in on the North Korea love fest.

It’s amazing that the same media that is so quick to slam the Trump administration for attacks on the press has apparently been clamoring to show the sunny side of an actual autocracy that allows no press freedom at all.

A Pew study released in October showed that only 5 percent of media reports portrayed the Trump administration in a positive light during his first year in office. Kim Jong Un’s sister, who is the regime’s deputy director of propaganda, apparently merits better treatment.

Perhaps even worse than the glowing profiles, members of the media lambasted the few voices who called out the charade and labeled the North Korean state exactly what it is, an almost unfathomably ruthless dictatorship.

A Washington Post columnist actually demanded that conservative commentator Bethany Mandel “apologize” to North Korea for calling it the most brutal regime in history.

In which a @washingtonpost columnist demands that @bethanyshondark apologize to NORTH KOREA. This actually happened. https://t.co/pSAwtRu5pf

CNN, not to be outdone by its own puff piece on Kim Jong Un’s sister, ran a piece criticizing Vice President Mike Pence for a “missed opportunity” at diplomacy with North Korea, even though Pence said the U.S. is willing to have talks with North Korea under the right conditions.

The article stemmed from a single, pro-North Korean source.

According to CNN, the “senior diplomatic source close to North Korea” said that Pence “degraded the image of the United States as a superpower” by meeting with North Korean defectors and Fred Warmbier.

Fred Warmbier is the father of Otto Warmbier, an American student who was nabbed by the North Korean government, imprisoned for years, and was finally released in a comatose state, a result of his brutal treatment.

Warmbier died shortly after returning to the U.S.

Plenty of ink’s been spilled about this shameless media fawning and anti-Americanism of the North Korean Olympics coverage.

These sad overtures will do little to soften the brutal whip of oppression that exists in that Stalinistic relic of the 20th century.

Instead, we should follow the path of President Ronald Reagan at the end of the Cold War and point out the real victims in North Korea, and what the Kim dictatorship does to the poor souls who suffer under it.

>>> Who Was the Daring Defector Who Raised His Crutches High, Defying the Kim Regime During the State of the Union?

One of the most profound moments in that half-century struggle was when Reagan stood in front of a microphone in 1983 and described the Soviet Union exactly as it was.

Reagan said of the USSR in his so-called “Evil Empire” speech, “[W]hile they preach the supremacy of the state, declare its omnipotence over individual man, and predict its eventual domination of all peoples on the earth, they are the focus of evil in the modern world.”

Predictably, the media castigated the speech as overly bombastic.

Journalist Steve Talbot wrote for Time magazine on the eve of the 1984 Olympics that Reagan had “made a bad situation” regarding the Soviet Union worse “by challenging the legitimacy of the Soviet regime, calling the USSR an ‘evil empire’ doomed to fail.”

But the dissidents buried deep in the Soviet gulags received the speech quite differently when word of it reached their ears.

Natan Sharansky, a physicist who had been unjustly imprisoned and spent over a decade rotting in a Siberian prison, explained to The Weekly Standard in 2004 what a world-shaking moment the Reagan speech was for those living under the yoke of oppression. It is worth quoting him at length:

It was the great brilliant moment when we learned that Ronald Reagan had proclaimed the Soviet Union an evil empire before the entire world … This was the moment. It was the brightest, most glorious day. Finally a spade had been called a spade. Finally, [George] Orwell’s Newspeak was dead. President Reagan had from that moment made it impossible for anyone in the West to continue closing their eyes to the real nature of the Soviet Union.

Less than a decade later, the Berlin Wall fell without a shot being fired, in no small part due to an administration’s willingness to confront oppression head on and rhetorically undermine the legitimacy of Soviet rule

The real hope for the people of North Korea is in American leaders, and in the free people of the world unequivocally calling out a monstrous evil when they see it. It is in showing those ignored by the sight of cameras and gaggles of reporters that they are not forgotten, and that the most powerful nation on earth is on their side.

This is why it was so important for the vice president to meet with the father of an American killed by the North Korean regime, and for the president to host a North Korean defector, on crutches, at his State of the Union address.

The words and actions of American leaders must serve as a rebuke and a stumbling block to tyranny, despite our media’s obnoxious and embarrassing paeans to dictators.