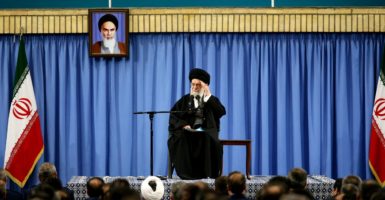 In a decade, Iran could emerge as a major nuclear power—and an entirely legal one under the international nuclear agreement reached by the Obama administration, experts fear.

“In about 10 years time, Iran will have, thanks to this deal, an industrial-sized nuclear program,” said Mark Dubowitz, CEO of the Foundation for Defense of Democracies, during a Heritage Foundation forum Wednesday.

“All they have to do is wait until the key restrictions on the deal sunset and they will emerge with a legal, internationally recognized, industrial-sized nuclear program.”

Iran’s economy could also grow enough that it would be somewhat immunized from U.S. sanctions unless policy changes are made now.

“If you like what North Korea is doing today, you’re going to love what Iran is going to be doing a few years down the road,” said James Phillips, a senior research fellow at The Heritage Foundation.

While Dubowitz and other national security experts who spoke at a forum held Wednesday by The Heritage Foundation opposed the U.S.-led multilateral nuclear deal with Iran, they would prefer to at least see enforcement of the deal—known as the 2015 Joint Comprehensive Plan of Action.

This week, Iran officials rejected U.S. demands that the International Atomic Energy Agency have access to inspect Iran’s military sites, which is part of the agreement.

“We were told by the Obama administration over and over again that we would get access to all sites, including military sites,” Dubowitz said.

“We have to make it, as a matter of U.S. policy, make it very clear that without physical IAEA access to military sites, there is no deal.”

Iran likely poses the biggest danger to the world, said Phillips of The Heritage Foundation. He added that Iran is a more dangerous regime than North Korea.

“It has a much stronger economy, a much more potent ideology, many more friends, allies, and surrogates around the world and in the region and it has a much more aggressive record of regional interventions,” Phillips said.

“The Persian Gulf is the center of gravity of world oil production. So if Iran is able to establish dominance over the flow of that oil, it will be tremendous energy security, national security, and perhaps long-term economic repercussions cascading out of that.”

Phillips said it’s important to build relationships with allies in the region, such as members of the Gulf Cooperation Council, made up of Bahrain, Kuwait, Oman, Qatar, Saudi Arabia, and the United Arab Emirates. Trump has issued warnings to Qatar for its association with terror groups.

Jim Hanson, president of the Security Studies Group, noted that Trump seems to be doing a strong job in building alliances with more moderate Arab countries—many of which opposed the Iran deal.

He further wondered how the Obama administration felt Iran was a potential ally.

“Through the entire Iraq War, they were one of the major producers and distributors of explosively formed projectiles that killed American troops,” Hanson said. “Somewhere between 500 and 1,000, at least, Americans troops were directly killed by weaponry provided the Iranians to the Shia militias that were used by them and by al-Qaeda in Iraq for killing U.S. troops.”

He added that now some U.S. dollars are going to proxy groups carrying out violence for Iran. Last fall the United States acknowledged transferring $1.7 billion in cash, non-U.S. currency.

“In 2016, they were the State Department’s leading sponsor terrorism worldwide,” Hanson said. “Now that may not get you much in the Trump administration. In the Obama administration, it got you pallets full of cash flown in the middle of the night.”