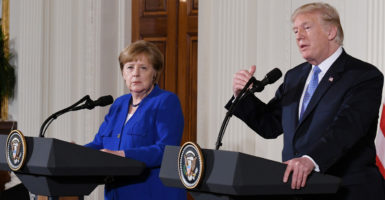 President Donald Trump said he has the responsibility to do what his predecessors failed to do—bring peace to a nuclear-free Korean Peninsula.

Trump reiterated that he is willing to “walk out” if he can’t reach a legitimate deal.

Trump said his meeting with Kim will be in the “coming weeks,” but declined to answer a question about whether he has spoken with him.

“We get a kick every once in a while out of the fact that I’ll be watching people that failed so badly over the last 25 years explaining to me how to make a deal with North Korea. I get a big, big kick out of that,” Trump said.

Merkel praised Trump for the negotiations.

“Today, we meet at a point in time where it has become very clear that the strength of the American president, where he really saw to it that the sanctions against North Korea are respected, has opened new possibilities, opened new ways,” Merkel said.

Trump also took a question about the moving of the United States Embassy in Israel to the Jerusalem capital. He said he “may go” to the opening.

Trump said the original cost for building the embassy in Jerusalem was going to be $1 billion, but it ultimately will be a few hundred thousand and built sooner. But, he said, “it’s going to be beautiful.”