Look Beyond the Olympic Facade. The Real Face of North Korea Is a Prison State. 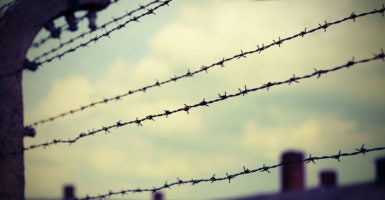 Dan Lee is a member of the Young Leaders Program at The Heritage Foundation.

Millions around the globe gathered around their TVs beginning Feb. 8 to watch the 2018 Winter Olympics, which are taking place in Pyeongchang, South Korea, a mountainous rural village, 110 miles east of Seoul.

As the world turned its gaze to the Korean Peninsula, it witnessed North Korea and South Korea unified, together under one flag, during the opening ceremony.

The symbolic display of unity by the two Koreas has already generated feelings of peace and goodwill on the peninsula. However, the ironic reality is that just 160 miles north of  Pyeongchang is Sariwon City Prison, one of the 30 known political prisons in North Korea.

Prisoners are subject to inhumane living conditions and are subject daily to torture, starvation, rape, and execution.

The labeling of these “political camps” as such is woefully inaccurate. They are essentially death camps, where North Koreans are sent for violations such as being critical of the Kim Jong Un regime or for practicing Christianity.

In his State of the Union address on Jan. 30, President Donald Trump condemned North Korea’s recent threats of nuclear attack, but he also focused on the humanitarian atrocities of the regime as well.

Trump cited North Korea’s depraved character as a threat to the U.S. and its allies, and said that he would not repeat the mistakes of previous administrations’ approaches of complacency toward North Korea. The president ended his remarks on North Korea by revealing the regime’s greatest fear; namely, the truth.

It’s time for Congress and the media to follow the president’s lead.

With recent satellite images detailing infrastructure upgrades in North Korea’s prison camps, the reality is that this humanitarian crisis is not going away. Passing legislation, such as S. 1118, the North Korean Human Rights Reauthorization Act of 2017, which provides grants to distribute materials necessary for North Koreans to access outside information, is a step in the right direction.

The U.S. can also raise awareness by reporting on the political camps of North Korea as a consistent and horrific reality.

The millions of people globally watching the Winter Olympics have witnessed a unified Korea. But the games will end Feb. 25, and they must look beyond the guise of good will that they present and realize the truth. North Korea is responsible for one of the most hideous humanitarian crimes to date.