Who Was the Daring Defector Who Raised His Crutches High, Defying the Kim Regime During the State of the Union? 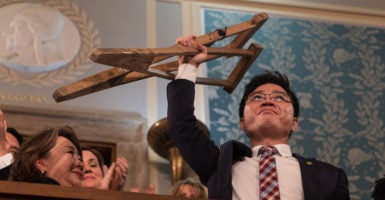 One of the highlights of President Donald Trump’s first State of the Union address was a North Korean defector brutalized by the regime who raised his crutches in defiance.

Describing him as a “witness to the ominous nature of this regime,” the president explained that Ji Seong-ho’s “great sacrifice is an inspiration to us all.”

Trump briefly covered some of the details of Ji’s life, highlighting some of the horrible tragedies that befell him and his family in North Korea, his arduous escape, and his efforts to help others now that he has found a new life outside the cruel world that is North Korea—a country the president previously described as “a hell no one deserves.”

“Seong-ho’s story is a testament to the yearning of every human soul to live in freedom,” Trump said Tuesday night as Ji, who was noticeably moved by the president’s words, stood before a cheering audience.

Indeed, Ji’s story is a fascinating one characterized by both tragedy and triumph.

The Great Famine struck hard in the mid-1990s, killing nearly a million North Koreans. People across the country struggled to find food, and Ji’s family was no exception. His grandmother starved to death.

When he was 13, an age when children ought to be in school, Ji would steal coal to exchange for scraps of food at the local markets around once a week, which was how often he was eating. On one trip, this malnourished young man passed out while riding the train, and he collapsed onto the tracks below. The unforgiving train tore large parts of his left hand and foot from his body.

“It hurt so much. I was screaming,” he wrote in a 2014 op-ed in The Guardian, adding, “My mother still remembers the screams—it was hard for her to process it.”

He was taken to a medical facility, where the doctors considered letting him die. “My mom was pleading and crying, so they decided to operate,” he revealed to The Hollywood Reporter in 2015. Ji underwent a four and a half hour surgery without anesthetic because there simply was not any available.

“On the operating table I could feel everything that was being done to my body. I was screaming at the top of my lungs,” Ji recalled. “I felt the saw cutting into the bone of my leg, and the scalpel through my flesh. Every time I passed out from the pain the surgeon would slap my face to keep me awake. The whole hospital heard my screams.”

Both of the tattered limbs were amputated.

To help him recover, his brother and sister ate dirt and offered their food to Ji. It took him 10 months to recover, as there were no proper rehabilitation programs. He learned to move around again on a pair of wooden crutches his father made, and in time, he was back to foraging for scraps.

At one point, he was caught slipping into China to find food.

“The police severely beat me for a week, maybe more than other escapees,” he told reporters, adding that an agent of the dictatorship once told him, “You went over to China hobbling on crutches. You’ve dishonored the leader by doing that in a foreign land. Sons of b—— like you are throwing mud on the face of our leader who is doing all he can to provide.”

There was no place in North Korea for a disabled person.

Ji’s mother and sister defected in 2004, and Ji and his brother followed suit two years later. The journey was fraught with dangers, and the difficult crossing at the Tumen River that separates China and North Korea nearly cost Ji his life.

The young man’s father, whose view of North Korea was shattered by the accident that crippled his son, tried to make the same trip but was captured and tortured to death by the authorities. Thinking back on the memories of his father in the wake of North Korean dictator Kim Jong Il’s passing, Ji told The National, “I regret that [Kim Jong Il] died too happily, too easily.”

Walking on crutches, the disabled defector crossed through China, Thailand, Laos, and Taiwan before he could finally reunite with his family in South Korea.

Ji, now a law student armed with prosthetic limbs, has dedicated his life to raising awareness about the horrors of life in North Korea, and he serves as the president of Now Action and Unity for Human Rights. He rescues other defectors and calls attention to the atrocities of the Kim regime.

Despite facing tremendous hardship, more than most people will ever experience, Ji overcame and achieved the precious freedom he longed for in his native land. Now, he helps others do the same.

North Korea saw him as an embarrassment, an undesirable object to be cast aside. He has proven that he is much more than that, a genuine testament to human strength and perseverance.