How Tax Reform Is Keeping Promise ‘Fight for $15’ Couldn’t 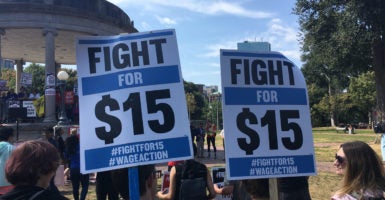 Activists rally for the minimum wage to be increased to $15 per hour as part of the #Fightfor15 campaign in Boston at a Labor Day rally on Sept. 4. (Photo: Miles Howard/newzulu/Newscom)

As the union-backed “Fight for $15” movement has sought to enact mandatory minimum-wage increases in states and localities across the country, tax reform seems to have spurred wage growth using a different approach.

On the day President Donald Trump signed the sweeping tax-reform law, the New Jersey-based OceanFirst Financial Corp. issued a press release announcing “a commitment to increase the bank’s minimum hourly pay rate to $15.00 within 30 days of the enactment of the Tax Cuts and Jobs Act,” affecting 135 employees.

Businesses large and small are taking the same action, citing tax reform as the reason, including some of OceanFirst’s much larger national competitors, such as Fifth Third Bancorp, with 13,500 employees, 3,000 of whom will benefit from the boost in base wage to $15, according to a company.

It isn’t just banks. Connecticut-based insurance firm The Travelers announced that along with $1,000 bonuses for its 14,000 employees, “we have only a small number of U.S.-based employees making less than $15 an hour. We will increase their hourly wage to $15.”

While still early in the wake of enactment of the tax-reform law, the demonstrable results seem to be in stark contrast with the mandatory minimum-wage laws requiring a $15 wage.

After passing such a city ordinance, Seattle commissioned a study by the University of Washington, which found the cost to low-wage workers outweighed the benefits by a 3-1 ratio, and found that on average, low-wage workers would lose $125 per month in lost work hours, lost employment or lost job opportunities because of the law.

The National Bureau of Economic Research published the study.

“The problem with legislating a $15-per-hour wage is that if productivity is not up to $15 per hour, that person loses their job,” Americans for Tax Reform President Grover Norquist told The Daily Signal. “When you change the regulatory and tax policies, you expand the economy for workers, and productivity can expand for a greater reward.”

The results were predictable, said David Kreutzer, senior research fellow for labor markets and trade at The Heritage Foundation.

“What happens with tax cuts is that demand pulls wages up, and then you don’t have a problem with people losing jobs,” Kreutzer told The Daily Signal. “Without an increase in demand, people will lose their job, or typically don’t get hired. … The fight for $15 is unambitious and impossible. You can’t make people rich through mandates. We want an economy so strong that people can make $20 or $25 per hour because productivity is so strong.”

At the start of the new year, 18 states instituted a higher minimum wage, according to the National Conference of State Legislatures.

Of those, California and New York passed laws to eventually raise the minimum wage to $15 per hour by 2022 and 2020, respectively. Other states that approved increases to less than $15 were Arizona, Colorado, Hawaii, Maine, Michigan, Rhode Island, Vermont, and Washington.

The states of Alaska, Florida, Minnesota, Missouri, Montana, New Jersey, Ohio, and South Dakota automatically increased their minimum-wage rates based on the cost of living.

Americans for Tax Reform found that overall, at least 1 million Americans were benefiting from announced pay raises or bonuses as a result of tax reform, and the nonprofit organization thinks that it’s likely more than that, since many companies don’t make public announcements.

In most cases, companies didn’t specify how many of their employees would benefit from the minimum-wage hike.

Companies on Americans for Tax Reform’s list that announced raising the base wage to $15 per hour are, with number of overall employees listed, where announced:

“We didn’t become a prosperous country because our Founding Fathers said, ‘Let’s pass a law to make everybody rich,’” Norquist said. “We became prosperous because they got out of the way to let people trade and invent. This is very helpful in getting out of the way so that more people will earn more than $15.”

The AFL-CIO, an umbrella organization for labor unions, supports laws to raise the minimum wage to $15 per hour, but opposed the tax reform law. An AFL-CIO spokesman did not respond to The Daily Signal’s request for comment.

The tax-reform law cut the corporate tax rate, previously the highest in the world among developed countries, from 35 percent to 21 percent, putting the U.S. on par with most other industrialized nations. The tax law also cut individual rates and eliminated some loopholes.