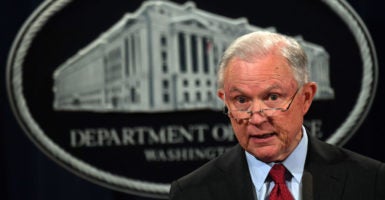 That’s good news for those who believe in the rule of law. And good news, too, for those concerned about public health and the safety of our nation’s youth.

Sessions’ directive gives the 94 U.S. attorneys all over the country clear guidance for deciding when to prosecute those who violate federal law prohibiting marijuana cultivation and distribution.

The Baby Boomers reading this column should realize that the marijuana being produced today is many times stronger and more potent than what we saw in the 1960s.

The science today is also much clearer: We have far greater knowledge of the long-term, deleterious effects of marijuana on the physical and mental health of users, particular children and teenagers.

The bottom line: Today’s pot is a potentially dangerous substance. That’s why it is classified as a Schedule I controlled drug along with heroin, LSD, and ecstasy—it isn’t alcohol.

While alcohol can be abused, it is not addictive for most people. Moreover, most consumers stop well shy of the point of intoxication. Moderate amounts even have some positive health benefits such as reducing the risk of heart disease and stroke.

Compared to alcohol, we now know that long-term marijuana use can cause physical disorders such as respiratory disease, social problems such as anomie, and mental health problems such as schizophrenia, something we didn’t know about in the 1960s.

Its effect on the young may be more pernicious. It may impair the brain development of children and teenagers. It is associated with lower test scores and lower education attainment. Teenagers who use pot are also much less likely to graduate from college and much more likely to attempt suicide.

Today’s pot pushers are just Big Tobacco 2.0. Why else would they be infusing THC, the active ingredient, into everything from cookies to ice cream to Gummy Bears?

States like Colorado that have legalized marijuana use have seen huge increases in marijuana-related traffic accidents and fatalities as well as accidental poisonings of both children and pets. Pot use by teenagers, who are most vulnerable to its damaging effects, has also greatly increased, as have school suspensions and expulsions for pot use.

The Cole Memo ignored all of this information, directing federal prosecutors to back off enforcement.

So does Sessions’ directive mean federal prosecutors are now going to go after the college kid who smokes a joint in his dormitory?

Of course not. U.S. attorneys have limited resources. They don’t prosecute misdemeanors. The only criminals they will take to court are the large-scale manufacturers and distributors.

Revenue-hungry lawmakers in states like California and Colorado may be willing to trade the problems created by marijuana legalization for the tax bonanza they expect to reap. But it’s a very raw deal for their neighbors.

States like Nebraska and Oklahoma have complained that Colorado’s legalization has increased trafficking into their states, with all of the myriad problems associated with increased drug abuse.

As Sessions’ memo notes, Congress “determined that marijuana is a dangerous drug and that marijuana activity is a serious crime.” The attorney general has no authority to simply decide not to enforce a law, which is exactly what the Holder/Lynch Justice Department did.

States cannot authorize parties to engage in conduct that federal law prohibits and as long as the Controlled Substances Act is on the books, states cannot tell their citizens to disregard it.

From a policy standpoint, it is wise to battle the growth of an industry that distributes a potentially dangerous drug in what is a national market and thus a national, not just a local, problem.

But Sessions has also done the right thing from a legal standpoint. He has acted to preserve a constitutional government in which Congress determines what the law is, and the president and the attorney general fulfill their duty to enforce the law—not ignore it.