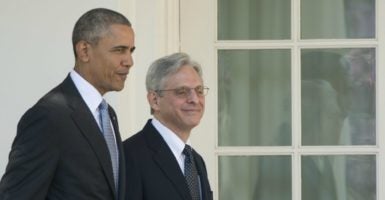 President Barack Obama's Supreme Court nominee, Merrick Garland, might get a chance at confirmation during the lame-duck session of Congress. (Photo: Ron Sachs/CNP/SIPA/Newscom)

While Republican leadership insists that the next president will nominate the ninth justice to the Supreme Court, a cadre of Republican senators is pushing a plan to confirm Merrick Garland if their party fails to take the White House this November.

The best contingency plan in case Republicans lose, supporters of the plan argue, is to confirm Garland during the lame-duck session in December before Hillary Clinton would take office in January.

Only three Republican senators have publicly committed their support to the idea so far—Sens. Susan Collins of Maine, Jeff Flake of Arizona, and Mark Kirk of Illinois. All share a centrist bent.

“Obviously if we lose the election and lose the White House, then we ought to move quickly to confirm Garland,” Flake told Business Insider earlier in June. “But I don’t think my view is shared by too many of my colleagues,” he continued. “Or enough of my colleagues to do it.”

Supporters describe the plan as a form of damage control. Confirmation of Garland in December, they argue, is better than grappling with an unknown and potentially more liberal Clinton nominee in 2017.

Many members are hesitant to discuss the strategy while the presidential race unfolds. But as uncertainty increases about the outcome of that election, behind closed congressional doors more staffers are opening up to the idea.

Republican opposition to the nominee has remained consistent from the beginning. Hours after the Feb. 13 death of Justice Antonin Scalia, Senate Republicans pledged to keep the seat on the high court open for the next president to fill in 2017.

Led by Majority Leader Mitch McConnell, R-Ky., the Republican conference has maintained a six-month blockade of Garland. Though many Republicans have met with the nominee privately, he hasn’t had a hearing in the Judiciary Committee or a vote on the Senate floor.

In order for that barricade to break, Republican leadership would have to do a complete 180. But that’s not going to happen, McConnell’s office told The Daily Signal.

“The leader has been absolutely clear,” said Don Stewart, McConnell’s spokesman. “The next president will make the nomination for this vacancy.”

Democrats insist Republicans are bluffing and they seem confident of victory. Since early February, they have forecasted a breakdown of Republican resolve, advising their political counterparts that the blockade is politically untenable.

Liberal groups have been the biggest cheerleaders for a change in Republican course. A coalition of Obama allies has kept up a steady drumbeat of messaging to encourage Republican senators to abandon their party’s blockade.

“Republicans have been going through this period of intensive posturing and it has totally hurt their credibility and their reputation as elected officials who respect the Constitution,” said Marge Baker, executive vice president of People for the American Way.

Though the GOP position seems entrenched, Baker said, it doesn’t have to be permanent. After a Democrat victory in November, she predicted “putting an end to this [blockade] from their vantage point should definitely be ‘sellable.’”

Liberals hawk Garland’s ideology, political connections, and age as selling points for Republicans. At 63 years old, he’s the most senior nominee in recent history, limiting his tenure in comparison to potentially younger nominees. And in 1997, the GOP-controlled Senate voted overwhelmingly, 76-23, to confirm Garland to his current circuit court post.

But conservatives aren’t buying the pitch for a lame-duck confirmation. They criticize the strategy as a false binary. And they insist there’s a third option.

“You can always run out the clock,” Brian Darling, a former Senate aide and current GOP operative, told The Daily Signal.

A filibuster mounted by a handful of conservatives could push the nomination into next year, Darling explained, drawing out the process in the hopes of forcing Democrats to the negotiation table.

And there’s some precedent for compelling a sitting president to back down from his nomination. Bipartisan opposition in 2005 forced President George W. Bush to withdraw the nomination of Harriet Miers.

Whether Republicans lose or maintain control of the Senate, conservatives say their strategy only requires the GOP to keep their resolve. The right could push the left to retreat by maintaining the blockade of Garland and then torpedoing the subsequent Clinton nominee.

To make that rearguard action possible, conservatives would have to win over the rest of the Republican conference when lawmakers return to Washington Sept. 6.

Their pitch will be simple, a senior GOP aide told The Daily Signal. To prepare for a clash with Clinton and a national conversation about the Supreme Court in 2017, Republicans should “make sure there is no lame-duck session of Congress.”

In other words, lawmakers would need to finish their legislative work before recessing for the holidays and leave Garland’s nomination to wither on the vine.