Special Counsel and Russia Probe Seen Likely to Carry On 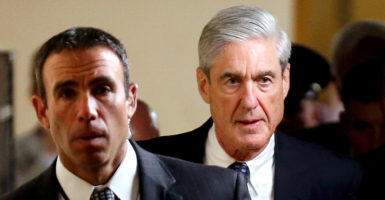 Special counsel Robert Mueller, right, departs June 21 after briefing senators on his investigation into Russian interference in the 2016 presidential election and possible collusion with the Trump campaign. (Photo: Joshua Roberts/Reuters/Newscom)

Special counsel Robert Mueller’s investigation of Russian meddling in the 2016 election, and possible collusion with President Donald Trump’s campaign, could fracture in multiple directions during 2018 and take its toll on both men.

“There is no upside for firing Mueller. He has not laid a glove on Trump,” @AndrewCMcCarthy says.

For Trump, a prolonged probe could mean a slew of unwelcome headlines, but Mueller still faces withering scrutiny for staffing his investigation with lawyers and FBI agents who demonstrated a political bias.

The special counsel’s investigation into Russian interference in the presidential campaign has been “constitutionally deficient” because of lack of oversight, said Tom Fitton, president of the government watchdog group Judicial Watch.

“The special counsel is operating like the king of the Justice Department. There is no check on him whatsoever,” Fitton told The Daily Signal.

But, Fitton said, “Politics aside, Mueller’s investigation has been irredeemably compromised.”

Among the questions raised by those on the special counsel’s team:

—Mueller had to remove an FBI agent, Peter Strzok, from the investigation after electronic text messages emerged showing Strzok calling in 2016 for an “insurance policy” in case Trump were elected.

Strzok led the probe of Hillary Clinton’s use of a private email server to conduct official business as secretary of state. The agent recommended that then-FBI Director James Comey change his statement about Clinton’s habitual use of the server from the legally weighted “grossly negligent” to the more broad “extremely careless” in describing her conduct. Trump fired Comey in May.

—Nine of the 15 publicly identified lawyers on the Mueller team are Democrat donors, giving a total of $62,043 to Democrat candidates (compared with other team lawyers giving $2,750 to Republican candidates). Of these, three gave a total of $18,100 to Clinton’s 2008 and 2016 presidential campaigns.

—One lawyer on the Mueller team, Jeannie Rhee, defended the Clinton Foundation charity and also represented Hillary Clinton in the email case. Another, Aaron Zebley, represented a Clinton aide who managed the email server.

—Judicial Watch recently filed a lawsuit under the Freedom of Information Act to find out whether Mueller communicated with his fellow former FBI director, Comey, before his Senate testimony in June following a report the two had “closely coordinated” on the testimony. Comey admitted during that testimony that he leaked information in hopes of spurring appointment of a special counsel.

The probe has produced some results so far.

Mueller also reached plea deals with Michael Flynn, a former Trump campaign aide who resigned after only weeks as national security adviser, and with George Papadopoulos, a low-level foreign policy adviser on the Trump campaign. Both admitted to lying to investigators.

Much of the criticism of Mueller seems political, said Scott Amey, general counsel for the Project on Government Oversight, one of the watchdog groups that supports a new law to protect Mueller and future special counsels.

“A lot of Republicans stood behind special counsel Mueller’s investigation when he was named,” Amey told The Daily Signal. “Now that the investigation is going on and some of the counts are against people formerly associated with the Trump campaign or administration, they are afraid it will affect the administration and maybe trickle down to them during the midterms.”

Amey said he believes Mueller’s team should be subject to oversight just as any government entity is. But, he said, the removal of Strzok, the FBI agent, shows the team has addressed staffing controversies.

“There are certainly questions that could be raised about the scope of Mueller’s work and his prosecutorial team,” Amey said. “That can be resolved through proper oversight by the Justice Department and from Congress to ensure it stays on course.”

Mueller spokesman Peter Carr declined to comment for this report.

During Dec. 13 testimony before the House Judiciary Committee, Deputy Attorney General Rod Rosenstein, who appointed Mueller, told lawmakers he saw no good cause to fire him.

None of the charges so far have produced evidence to back up Democrats’ allegations of collusion between the Trump campaign and Russians.

The Washington Post reported last month that the special counsel’s probe could last another year. Trump already has said multiple times that he has no plans to fire Mueller, and told The New York Times in an interview last week that he expects the special counsel will treat him fairly.

The president likely won’t sack Mueller given his experience after his firing of Comey, which led to the special counsel probe, said Andrew McCarthy, a former assistant U.S. attorney for the Southern District of New York and frequent legal commentator.

“There is no upside for firing Mueller. He has not laid a glove on Trump. Everytime Mueller does something, Trump says, ‘See, nothing about collusion,’” McCarthy told The Daily Signal, adding:

The investigation has made it harder for Trump to govern and it has pissed him off. But his biggest problem came when he fired Comey, which led to the Mueller investigation. Firing Mueller would be like firing Comey times three.

Still, four government watchdog groups—Issue One, Open the Government, Project on Government Oversight, and the Sunlight Foundation—last month signed a letter urging Congress to support a bill called the Special Counsel Integrity Act that would make it more difficult to fire a special counsel.

The move comes as Republicans in Congress continue to criticize Mueller.

“I believe he is a person of integrity, even if he has made obvious mistakes with staffing. He doesn’t seem to be reaching for the stars without evidence,” said McCarthy, who has been critical of the special counsel’s Russia probe. He added:

Staff alone doesn’t discredit the investigation. He has guilty pleas. He needs to get control of staff. If someone appears to have a political ax to grind, fire them. He’s got 17 lawyers, and he doesn’t need 17.

The charges thus far seem to show Mueller wants to build a case of obstruction of justice, possibly around other administration or campaign officials, McCarthy said.

“If the case is collusion, which would be conspiracy to commit espionage, he wouldn’t be indicting people for lying to the FBI,” McCarthy said. “If you’re trying to build a case, you don’t use as your witnesses convicted liars.”

Others see a much stronger case against the integrity of Mueller’s probe.

“As more time passes, the more Mueller’s credibility is reduced,” Peter Flaherty, president of the National Legal and Policy Center, a government watchdog group, told The Daily Signal. “The legal case to fire or relieve Mueller is strong. The question is the optics. It might be best to leave him there, since ultimately he will come up with little.”

Flaherty said he believes the Russia investigation is in place to shield the FBI from exposure in using the discredited “Steele dossier,” an anti-Trump document funded by the Clinton campaign, the Democratic National Committee, and the opposition research firm Fusion GPS, to justify the probe of Trump associates.

“Mueller can rescue his credibility by expanding the investigation to Clinton and the genesis of the dossier,” Flaherty said, adding:

The problem with that is that the FBI was involved. The Mueller investigation from the beginning was never to find Russian interference in the election. It always was and continues to be a rear-guard move by former and current FBI officials.

Some Republicans in Congress have called for a second special counsel to look into the roots of the so-called dossier and if it is the basis for the Trump-Russia allegations. But Flaherty said a new investigator isn’t needed, and that Mueller should be able to handle the matter.

“It involves Russian interference in the election,” Flaherty said. “It wouldn’t require an expanded mandate, because it’s clearly in the realm of election influence.”

Recent news reports suggest it actually was boasting to an Australian diplomat by Papadopoulos, the low-level Trump campaign adviser, about the content of Clinton emails that led to the FBI investigation.

Fitton, of Judicial Watch, said he doesn’t buy this idea because it is the product of government leaks.

“It’s another leak of classified information and an attempt to steer attention away from the dossier story,” Fitton said.

McCarthy, the former federal prosecutor from New York, also wrote a recent National Review piece that cast skepticism on what seems to be an evolving narrative about Russian collusion.

The endgame for the special counsel is whether there is an impeachable offense, McCarthy told The Daily Signal.

“I have to think Mueller is experienced enough to know he can’t indict a president, so that leaves impeachment,” McCarthy said. “I’m not saying Mueller wants an impeachment. He might see his job as gathering information and leaving it to Congress to decide what to do with it.”

It is almost 20 years since a report by independent counsel Kenneth Starr led to the impeachment of President Bill Clinton in the House of Representatives in December 1998 on charges of perjury and obstruction of justice. The Senate ultimately acquitted Clinton, who had high public approval numbers, and Starr and Republican lawmakers, besieged by criticism, lost the public relations battle.

“Ken Starr was a brilliant legal mind, but he wasn’t a prosecutor. He was an appellate lawyer. Mueller knows how to feed the beast in terms of the media, getting charges out there,” McCarthy said. “Starr went underground for eight months, gathering evidence and preparing a report while the Democrats attacked his case. Mueller has brought three sets of charges. There will be trial dates, discovery, and a continuous flow of news.”

Fitton noted another fundamental distinction between Starr and Mueller.

“The difference is that Starr was investigating actual crimes. Mueller was tasked with investigating Donald Trump and finding a crime,” he said.