The Insane Reason This Girl Was Forced Out of D.C. Public Schools 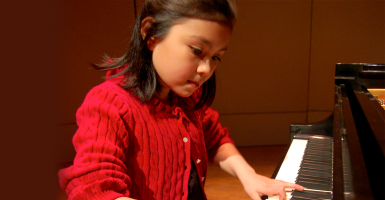 Avery plays the piano at age 10. (Photo: From the Top/Flickr) Yes, the 13-year-old musical genius, who was chosen to join 11 other musicians from around the world to play in Munich last year, playing this masterpiece…

… is also a truant in the eyes of the D.C. public school system. In March, Avery traveled to Connecticut for a piano competition. She won the Grand Prix award for her performance of a Chopin Waltz and when she returned to school, a truancy officer was called. D.C. bureaucrats label any student, including Avery, with 10 “unexcused absences” as a truant.

So, for Avery, the straight-A student at Alice Deal Middle School, the Jack Kent Cook Honors Scholarship recipient at the Levine School of Music, the trained pianist since the age of five — rules are rules. According to The Washington Post, Avery’s parents tried to persuade the school system to excuse her travels. The truancy law gives school officials the option to decide what an unexcused absence is. A 2012 photo of the Gagliano family. Avery holds Jieming Tang’s Gagliano violin. (Photo: From The Top/Flickr)

They created a portfolio of her musical achievements and academic record and drafted an independent study plan for the days she’d miss while touring the world as one of the star pianists selected by a prestigious Lang Lang Music Foundation, run by Chinese pianist Lang Lang, who handpicked Avery to be an international music ambassador. Now Avery is forced to spend her eighth grade year as a homeschooler, and the Gaglianos aren’t happy:

“We decided to home-school her because of all the issues, because it was like a punch in the gut to have to face the fight again this year,” Galgiano told the Post. “We didn’t want to do this. We want to be part of the public school system. Avery has been in public school since kindergarten. She’s a great success story for the schools.”

Ironically, at the private Stone Ridge School of the Sacred Heart in Bethesda, student stars are praised for their winnings outside of school. Olympian swimmer Katie Ledecky has her own sidebar on the school’s website titled “Our Olympian Student” featuring her scores, photos, and story. Avery’s accolades include studying in the Inaugural Lang Lang Junior Music Camp in Munich, Germany, as well as under Dr. Veda Kaplinsky at the Aspen Music Festival. She was also featured in a NPR broadcast program “From The Top” and a two-hour PBS documentary titled “Arts and the Mind” that was broadcast nationwide. Unfortunately, all the awards in the world clearly won’t convince D.C. public schools to recognize or reward Avery’s talent.

Update: After Petula Dvorak of The Washington Post published her column on Avery yesterday, Chancellor Kaya Henderson issued a statement “saying the column was wrong, and they would like to have Avery back at Alice Deal Middle School.”

Dvorak stands by her reporting:

It took a year of frustration, mixed messages and truancy notices before Avery’s parents got to hear this from Henderson. Glad they finally did.