California Is Officially a Sanctuary State 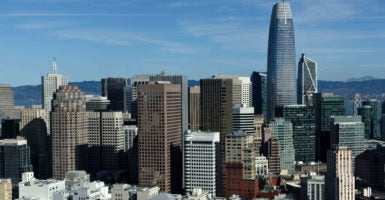 The controversial law, SB 54, passed the state Legislature in September and was signed into law by Democratic Gov. Jerry Brown the following month. It prevents police in California, which has by far the nation’s largest illegal immigrant population, from asking people about their immigration status or participating in most federal immigration enforcement actions.

A response to the Trump administration’s criticism of sanctuary jurisdictions, the law sharply limits state and local law enforcement communication with federal immigration authorities, and prevents jails from holding criminal aliens on immigration detention requests, unless the person has been convicted of certain crimes.

Under Brown’s leadership, California has become the leading opponent of President Donald Trump’s immigration agenda over the past year. In addition to SB 54, the state has enacted a slate of laws aimed at protecting illegal immigrants and their children from the administration’s tougher enforcement of immigration laws.

Other immigration bills passed in 2017 include a measure that prohibits landlords from reporting their illegal immigrant renters and another that prevents employers from allowing immigration raids at their work sites without a court order.

SB 54 was the most contentious of the California initiatives, drawing condemnation from federal immigration authorities and many county sheriffs throughout the state. Acting Immigration and Customs Enforcement Director Thomas Homan blasted California lawmakers, accusing them of putting “politics over public safety.”

“Disturbingly, the legislation serves to codify a dangerous policy that deliberately obstructs our country’s immigration laws and shelters serious criminal alien offenders,” he said in a statement following the passage of SB 54.

Despite threats by the administration to withhold federal funds from sanctuary jurisdictions, Brown has not shied away from using his authority as governor to thwart certain immigration enforcement. He pardoned two illegal immigrants of state felony convictions last month, a move that could allow the men, who were set to be deported, to appeal their cases in immigration court.

Brown, who granted the pardons just before Christmas, characterized them as acts of mercy, reports The Sacramento Bee.