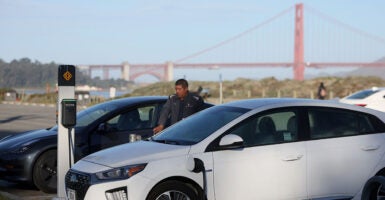 As California continues to drive forward with policies to remove gas-powered cars from the road, can its grid even support the mandate? Pictured: Electric vehicles recharge March 9 at a station in San Francisco. (Photo: Justin Sullivan/Getty Images)

California’s electric vehicle mandate should align with Europe and China rather than other states such as Texas and Mississippi, a member of California’s air quality board said as it recently voted to ban the sale of new gas- and diesel-powered cars and light trucks by 2035.

What California does to require residents to purchase electric vehicles ought to line up with the “world market” rather than Texas, Mississippi, and their “ilk,” Hector De La Torre, a former state legislator appointed to the California Air Resources Board by the State Assembly, said during the board’s Aug. 25 meeting. A video captured his remarks.

“Denmark, Iceland, Ireland, Israel, Netherlands, Norway, Scotland, Slovenia, Spain, Sweden, all have the mandates coming up between 2030 and 2040. We are right in the middle of the international trend,” De La Torre, a Democrat, said.

And China, the country doesn’t have a mandate, but there are provinces, very large provinces in China, that do have a ZEV [zero-emission vehicle] mandate in the same time frame as we have and these other countries.

From 2004 to 2010, De La Torre was a member of the California State Assembly representing a largely Hispanic portion of Los Angeles County.

He made his remarks as California became the first state in the nation to mandate that, by a certain date, all new cars and light trucks sold there may not emit greenhouse gases linked to climate change or global warming.

But while California pushes for a total shift to electric vehicle sales by 2035, its energy grid seems unable to keep up with demand for electricity.

A week after the California Air Resources Board voted to implement the electric vehicle mandate, the state had to issue guidance asking residents to conserve energy. This included advising them not to charge electric vehicles.

Similarly, Europe has struggled with energy issues since the Russian invasion of Ukraine, combined with green policies adopted by various countries.

“Forcing 100% electric vehicles by banning the internal combustion engine means higher costs [and] no choice, and increases America’s dependence on China. It will devastate our economy and have virtually zero impact on the environment,” Derrick Morgan, executive vice president of The Heritage Foundation, told The Daily Signal in an email. (The Daily Signal is Heritage’s multimedia news organization.)

I’m grateful that Texas, Mississippi, Virginia, and about a dozen other states are standing strong against California and China. We hear a lot about how great EVs are. If they are so good, why do these foreign countries and California feel the need to ban their competitors?

Missouri and Virginia are among states that have resisted calls to ban gas-powered vehicles.

Virginia Gov. Glenn Youngkin, a Republican, promised Aug. 28 that he would put an end to state policies designed to ban gas-powered vehicles. Youngkin said he is working to roll back legislation passed under his predecessor, Democrat Ralph Northam, that tied Virginia’s vehicle emissions standards to those of the California Air Resources Board.

“In an effort to turn Virginia into California, liberal politicians who previously ran our government sold Virginia out by subjecting Virginia drivers to California vehicle laws,” Youngkin tweeted. “Now, under that pact, Virginians will be forced to adopt the California law that prohibits the sale of gas- and diesel-fueled vehicles. I am already at work to prevent this ridiculous edict from being forced on Virginians. California’s out of touch laws have no place in our Commonwealth.”

Seventeen states, including Mississippi, Missouri, and Texas, filed a lawsuit in May challenging California’s ability to depart from federal emissions standards and implement its own vehicle emission standards and zero-emissions goals.

In a statement announcing the lawsuit, Missouri Attorney General Eric Schmitt, a Republican, said: “If California is able to set restrictive ‘gas emissions’ standards, manufacturing becomes astronomically expensive, and those additional costs are passed onto consumers, many of which are Missourians.”

A Schmitt spokesperson later added that Missouri would “continue to fight California’s efforts to impose their radical policies on the rest of the country.”

This report was modified within two hours of publication to incorporate Derrick Morgan’s comments.