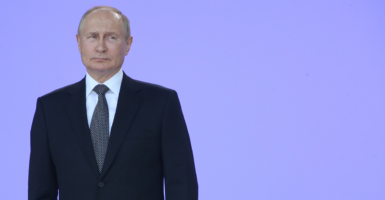 "With Russia cutting off countries in Europe from oil and gas ... the Europeans have seen their energy prices skyrocket beyond anything they could have imagined," the Hudson Institute's Brigham McCown says. Pictured: Russian President Vladimir Putin is part of the opening ceremony Aug. 15 for the International Military Technical Forum near Moscow. (Photo: Contributor/Getty Images

Decades of bad policy decisions by European countries combined with Russia’s “weaponization” of its oil and natural gas resources are to blame for Europe’s ongoing energy crisis, one expert in energy security says.

“American and security leaders have been telling Europe since the rise of the Soviet Union that they needed to diversify their energy supplies and not be captive to Russian oil and gas,” Brigham McCown, a senior fellow at the Hudson Institute and director of its Initiative on American Energy Security, told The Daily Signal in a phone interview.

“And even as bad as the Cold War was at times, Germany and the then-Soviet Union decoupled political policy from energy policy.”

There was, in essence, a political agreement never to use energy as a weapon, not to weaponize energy.

Frankly, some of this decoupling is, I think, what led Germany down the path most recently of thinking that today’s Russia was similar to the Soviet Union, who back then was very hard-pressed for cash, [and] that that would continue.

That calculation has changed in the years since the Soviet Union’s collapse in 1991, he said, and particularly with Russian President Vladimir Putin’s invasion of Ukraine on Feb. 24.

“Putin is a very different person than the Politburo, which ran the Soviet Union. You overlay that on top of some countries’ reluctance, namely Germany, to embrace nuclear power and other resources against the backdrop of this exuberance of transitioning too early to renewable forms of energy,” McCown, former president of Alyeska Pipeline Service Co., said.

“All of that coming together creates the perfect storm and with Russia cutting off countries in Europe from oil and gas—which was very cheap, by the way—the Europeans have seen their energy prices skyrocket beyond anything they could have imagined,” he said.

Derrick Morgan, executive vice president of The Heritage Foundation, predicted that energy prices will continue to rise because Russia intermittently has stopped the flow of natural gas to Europe. (The Daily Signal is Heritage’s multimedia news organization.)

“Russia over the last several months has occasionally stopped supply. Some of this, according to historical patterns, is for [pipeline] maintenance and that sort of thing,” Morgan told The Daily Signal, “but other times, it’s unclear why. And you have a number of observers in Europe pointing out that there are really good reasons being put forward for those supply disruptions.”

“It seems as though Russia is really trying to use its dominant market positions to inflict pain and uncertainty in Europe,”  he said.

The European Union, or EU, is dependent on Russia for 46% of its coal imports and nearly 30% of its oil imports, CNN reported.

The Nord Stream 1 pipeline, in operation for more than 10 years and stretching from Vyborg, Russia, to Greifswald, Germany, is the largest natural gas pipeline from Russia to Europe, Al Jazeera reported. It provides 40% of Europe’s natural gas.

Nearly 40 years ago, President Ronald Reagan warned Europeans about the dangers of relying on the Soviet Union for natural gas, McCown said.

The Nord Stream 1 pipeline underwent maintenance in July, which McCown said traditionally happens during the summer rather than the winter months. But he said he is concerned about the fact that the pipeline was restored to only 30% of capacity after the maintenance.

“There was no rationale or justification for that [partial capacity] other than the Kremlin has weaponized energy now,” McCown said.

The Hudson Institute scholar added later that Europe itself is largely to blame for its energy crisis, saying:

This is largely a crisis of Europe’s own making. Their energy policies, you would think, would become more realistic, but they really haven’t. The EU is pushing forward with a Green New Deal of their own, which makes ours look small, called ‘Repower EU.’ They acknowledge now something that they should acknowledge, and that is [that] energy security matters.

Russia shut down its Nord Stream 1 natural gas pipeline on Wednesday for maintenance and will reopen it on Saturday, The Wall Street Journal reported.

As winter approaches, energy rationing in Europe seems unlikely because of skyrocketing energy costs, which have prompted more Europeans to save fuel and look for alternative energy to natural gas, The Wall Street Journal reported.

“Supply levels look like about 80% right now. The International Energy Agency recommended getting up to 90%, so they’re trying to stockpile as much as they can now to get them through winter and it looks like they’re doing OK,” Heritage’s Morgan said, adding:

Not that this won’t be a concern at all, but it looks like they’re somewhat on track. That assumes that supplies will be relatively consistent over the next few months and that these several-day interruptions don’t become a pattern and that the other measures that they’re taking now to try to reduce consumption all are implemented.

Before returning to Heritage in February, Morgan was senior vice president of the American Fuel and Petrochemical Manufacturers, a trade association that supports free enterprise and represents companies producing over 85% of the refined products and petrochemicals made in America.

The U.S. does not yet have the same infrastructure to export natural gas as it does for crude oil, contributing to the lower prices of natural gas in the U.S. compared to Europe, Morgan said, adding that oil “is essentially a global commodity, and therefore it’s traded on a global basis.”

Think about it from the standpoint of a producer. If you have the natural gas to sell, you’re going to want to sell it to the highest bidder, right? And certainly, they’re doing some sort of that and they’re able to export some to Europe and other places in the world.

But they’re not able to do that with all of their supplies and so they end up selling in the U.S., and that’s why prices are lower.