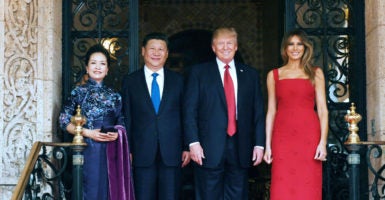 President Donald Trump’s new national security strategy is a significant and positive break with the recent past on many political and security issues. It is also relatively and appropriately conventional on some other matters—like the importance of alliances and American engagement in the world.

But the area of international trade, the strategy, which presidents are required by law to submit to Congress, raises some red flags.

Red flag 1: The use of the term “fair trade.” This is a time-honored Washington catch phrase. Sometimes it means exactly what it says. Virtually all Americans would agree that trade—as most other things in life—should be “fair.”

Most often, however, the term masks protectionism and industrial policy. Proponents of “fair” trade have used the term to justify keeping competitive products and investment out of the U.S. market, not for the benefit of American consumers and workers, but to pad the accounts of well-connected industries and their labor unions.

Red flag 2: Emphasis on bilateral trade deficits. Trade deficits are not the only way to measure economic relationships. In fact, at the end of the day, the broader account of our economic relationships balance out as foreigners invest in the United States. Sure, some of that goes into U.S. government debt, which is far too large. But that is a different problem, and one entirely under our own control. Otherwise, foreign investment in the U.S. is a good thing.

Besides, whenever deficits and imbalances are mentioned in the national security strategy, it is in the context of the deficit in goods. This does not account to the fact that the U.S. maintains a large surplus in services.

To the credit of the administration, the strategy does prioritize the negotiation of new bilateral trade agreements. This is critically important in the wake of the U.S. withdrawal from the Trans-Pacific Partnership and renegotiation of the North American Free Trade Agreement and the U.S.-Korea Free Trade Agreement. But assuming by “bilateral agreements” the administration means “free trade agreements,” it will have to take a broader view of their value if it is to find any takers.

Red flag 3: The emphasis on revitalizing the U.S. manufacturing base, strengthening the defense industrial base, defending the “national security innovation base,” and prioritizing the development of particular technologies. Like the reference to “fair” trade, these terms may hide an intention to pick winners and losers among participants in the American economy.

The administration seems to have a real weakness for the American steel industry, for example. Is the strategy really saying that industries like steel and aluminum need to be protected whatever the cost to supply chains and consumers, and regardless of the real impact of foreign supplies on U.S. national security? Will this logic apply in other areas like semiconductors, vehicles, shipbuilding, and aircraft that the administration has identified as “core industries”? What other technologies and innovations will be prioritized and to whose benefit?

Export of goods is an important part of the American economy, but so are services, imports, and foreign investment. It is not the role of government to choose the balance among these, but the market’s role.

Red flag 4: The integration of economics and China policy. The strategy rightly draws a bright new line on China. Indeed, the U.S. must face up to the challenge that China presents American interests abroad, over freedom of the seas, on Taiwan, and on trade (including its theft of intellectual property rights and protection of its own economic stakeholders).

We also must take a new look at the way China’s state-owned companies interact with free markets. Given the vast advantages of state support, does it make sense that Chinese companies are treated on the same basis as companies that do not have such support? We need to think this through.

It is no secret that trade issues are hotly contested in this administration. And the strategy gives no indication that the debate has been settled. The references to trade could simply indicate a very robust enforcement regime—coupled with an effort to reach bilateral free trade agreements. Or they could presage an unprecedented economic nationalism that would do serious damage to the American economy.

Time will tell. In the meantime, the national security strategy helps point to where the battle must be joined.