In Aftermath of Brussels Attacks, Conservatives Call for Border Security 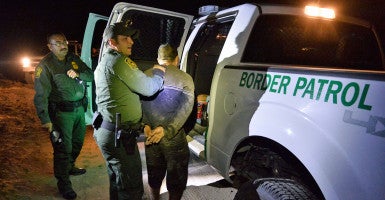 U.S. Border Patrol agents search a person suspected of crossing the Rio Grande River to enter the United States illegally near McAllen, Texas, earlier this month. The nearly 2,000-mile border with Mexico is the most frequently crossed international border in the world. (Photo: Larry W. Smith/EPA/Newscom)

In the aftermath of Tuesday’s terror attacks in Brussels that left at least 30 dead, conservatives in Congress say that addressing border security is the key to ensuring terrorists don’t end up in the United States.

In response to a question about how the country can improve its intelligence capabilities, lawmakers attending the monthly event Conversations with Conservatives pointed to securing the border as a way to stop terrorists from striking or entering the United States.

“We’ve been saying over and over this isn’t about dealing with Mexico. This is dealing with national security,” Rep. Matt Salmon, R-Ariz., told reporters Tuesday. “This dialogue about immigration and all the people that are coming across the border, it doesn’t do justice to the fact that it is a serious security breach, and if we’re going to take seriously dealing with ISIS and other terrorist groups across the globe, then we have to secure the border.”

Rep. Dave Brat, R-Va., criticized Immigration and Customs Enforcement, specifically, for failing to enforce the laws on the books, particularly when it comes to illegal immigrants who appear in court, are released, and don’t show up again.

“If we would follow the law for starters, that would go a long way toward solving a lot of the problems,” Brat said. While Brat and Salmon voiced concern over the security of the nation’s southern border, Rep. Cynthia Lummis, R-Wyo., told reporters that the country needs to focus on collecting intelligence on the ground in order to prevent terror attacks from occurring on U.S. soil.

“With regard to ISIS, I think around the world we do need to embed more into the communities that are hotbeds or breeding grounds of these radicals and try to nip it in the bud as early as possible,” she said. “I think on the ground, intelligence that’s gathered nationwide is going to have to be an ongoing source of information, and it’s not going to be inexpensive, and it’s not going to happen overnight.”

The bombings in Brussels came four days after Belgian authorities captured Salah Abdeslam, a suspect in November’s terror attacks, in the capital city. Abdeslam was one of 10 men police believe were directly involved in terror attacks carried out by ISIS in Paris late last year, which left 130 dead.

The terror attacks in Paris sparked a debate among lawmakers about how the U.S. should address Syrian refugees entering the country, as well as whether Congress should alter the visa waiver program.

The House of Representatives passed a bill in November toughening the screenings of Syrians looking to come to the U.S. through the refugee program. The legislation failed in the Senate.

The Republican-controlled Congress, though, ultimately passed a measure through an omnibus spending bill, signed into law by President Barack Obama, that tightened the program’s requirements and required anyone who visited Iran, Iraq, Sudan or Syria after March 1, 2011, to apply for a visa.

Following Tuesday’s terror attacks in Brussels, GOP lawmakers once again called into question the process by which people come to the U.S.

Sens. Mark Kirk, R-Ill., Tim Scott, R-S.C., and David Vitter, R-La., separately called on their colleagues and the Obama administration to reexamine both the refugee program and visa system.

Rep. Tim Huelskamp, R-Kan., meanwhile, said it’s inevitable that terrorists will try to enter the country through the refugee program.

“You have to take ISIS at their word,” Huelskamp told The Daily Signal. “They are going to infiltrate [the refugee program], and if we had anybody else as president, even some Democrats have said we need to take a time out to understand what’s going on here. They have made it very clear they’re going to misuse our immigrant refugee system in order to infiltrate.”

The Kansas Republican, though, said it’s unlikely the president would sign legislation halting the program or lessening the number of Syrian refugees coming into the U.S. this year.

“It’s hard to imagine a situation where he would actually want to do something,” Huelskamp said.