Find Out How Your Senators Voted on the Refugee Bill 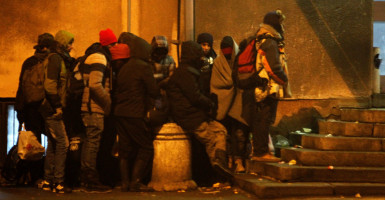 The Senate voted 55-43 Wednesday to block legislation that would strengthen the vetting process for refugees seeking haven in the United States.

As fears of terrorism remain heightened, the bill would have made it more difficult for refugees emigrating from Iraq and Syria to apply for temporary status by requiring the FBI and Department of Homeland Security to escalate background checks.

The Republican-backed legislation, called the American Security Against Foreign Enemies Act—dubbed the “SAFE Act” by House members—needed to clinch at least 60 votes to avert a filibuster spearheaded by Democrats.

Republicans fell short of advancing the legislation to debate by five votes.

Mike Needham, the CEO of Heritage Action for America, said that while the SAFE Act would create a stricter vetting program for Syrian refugees, it relied on President Barack Obama’s appointees to execute the proposed changes.

“With our national security at risk, Congress has a duty to ensure there is a thorough and transparent vetting program in place,” Needham said.

Concerns about Obama’s plan to resettle up to 10,000 Syrian refugees in the U.S. this year spiked after the terrorist attacks in Paris and San Bernardino, Calif.

One Islamic State suicide bomber in the Paris attacks that left 130 dead reportedly entered France using a stolen or fake Syrian passport, igniting fear among Americans that the president’s plan would lead to similar attacks in the U.S. without a stringent vetting process in place.

Needham said Congress should deny funding to the Obama administration’s refugee program “to ensure that there is a real plan to mitigate the serious national security risks” associated with the current resettlement policies.

The SAFE Act had sailed through the House in November by a bipartisan vote of 289-137. Forty-seven House Democrats joined with Republicans to support the bill, despite a veto threat from the White House.

“By blocking this measure, Senate Democrats are making it that much harder for us to keep Americans safe. Their vote is irresponsible in a time of grave threats,” House Speaker Paul Ryan said in a formal statement Wednesday following the Senate’s vote.

Proponents of the legislation wanted to give the FBI, the Department of Homeland Security, and the director of National Intelligence the authority to heighten background checks to guarantee that any refugees pursuing asylum from Syria or Iraq are not “a threat to the security” of the U.S.

Meanwhile, Obama and Democrats who stood in opposition to the bill argued that the current vetting system is stringent enough and that the SAFE Act would only hinder assistance to those attempting to escape areas enveloped in war and terrorism.