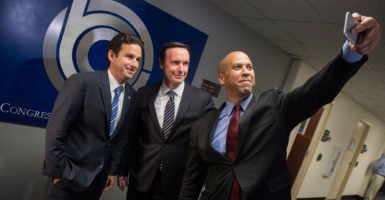 Selfies are fine, but it's time for the Senate to get serious about deficit spending. From left: Sens. Brian Schatz, D-Hawaii; Chris Murphy, D-Conn.; and Cory Booker, D-N.J., smile for the camera June 20, 2017, in front of the logo for the Congressional Budget Office. (Photo: Tom Williams/CQ Roll Call/Newscom)

The Congressional Budget Office’s latest long-term budget outlook, released this week, shows that the nation is still on an unsustainable budget path, with no improvement since CBO’s last long-term report.

Without swift action to reverse the current course, the nation is headed toward a fiscal disaster.

CBO projects that over the next 30 years, debt will rise to 152 percent of gross domestic product, “the highest in the nation’s history by far.” The agency writes that “the prospect of large and growing debt poses substantial risks for the nation and presents policymakers with significant challenges.”

The report highlights the dire need for Congress to pursue a conservative budget, including reconciliation legislation, which redefines the role of the federal government and throws off the burdens of big government, allowing free enterprise and individual freedom to flourish.

The Heritage Foundation’s “Blueprint for Balance” would do just that, putting the federal budget on a long-term path to sustainability and, beyond the numbers, remove favoritism from the budget process and strengthen civil society.

Debt is skyrocketing. The 50-year average for federal debt held by the public is 41 percent of gross domestic product, or GDP.  At its current level at 78 percent, debt is almost twice the size of its historic average. In just 13 years, CBO projects that publicly held debt will eclipse the entire U.S. economy. In 30 years, this debt will be half again as big as the economy.

High levels of debt create a drag on the economy, which leads to an increased risk of inflation, higher interest rates, and lower take-home wages for American workers.

In other words, debt could undo much of the economic growth benefits being realized as a result of the Tax Cuts and Jobs Act of 2017 and deregulation. Debt also threatens the safety and security of America and reduces the nation’s ability to respond to domestic and international crises.

Spending is the problem. CBO projects that 2018 will finish with a federal budget deficit of 3.9 percent of economic output. By 2048, that number is projected to more than double, reaching 9.5 percent of GDP.

The rise in deficit levels can be attributed directly to more government spending. Currently, federal spending totals about 21 percent of GDP per year. 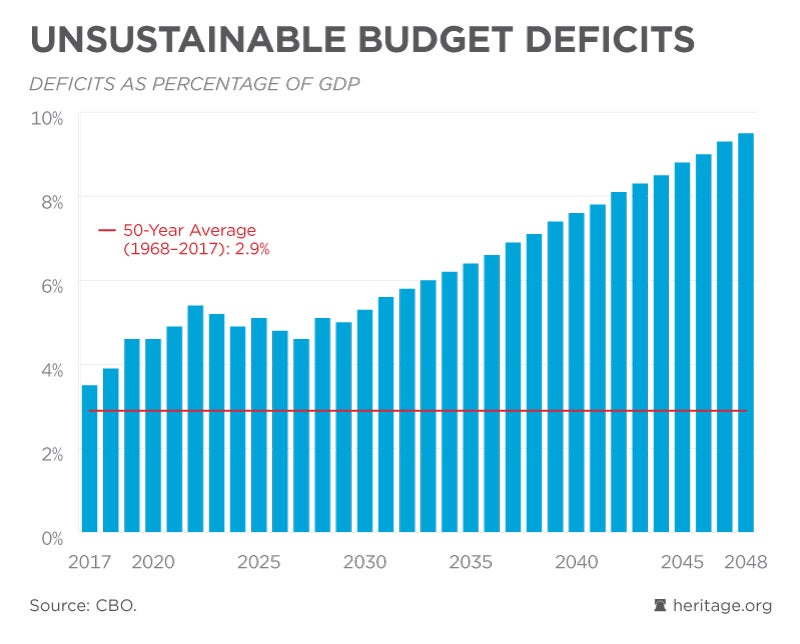 Deficit spending comes at a high cost. Interest payments on the national debt currently consume about 1.6 percent of the economy. Over the next 30 years, CBO projects, that number will nearly quadruple, rising to 6.3 percent of GDP per year by 2048.

Of the total budget deficit of 9.5 percent of GDP projected by 2048, two-thirds will be due to interest on the debt. The federal government is on track to spend more on interest on the debt than it does on national defense, Medicare, Medicaid, or Social Security.

Higher taxes can’t fix the debt crisis. Over the past 50 years, annual tax revenues have averaged 17 percent of economic output. Over the next 30 years, CBO projects that revenues will rise to nearly 20 percent of GDP per year, 3 percent higher than the historical average.

Over that same period, spending is projected to rise to 9 percent above the historical average. Revenue growth simply will be unable to keep up with Washington’s spending addiction.

Politicians who argue for higher tax rates to reduce the deficit would rather take more of hardworking Americans’ money than do the politically difficult work of cutting spending. Taxing the rich will not fix this problem. Taxes would need to go up on all Americans to feed the federal behemoth.

CBO’s latest report shows the need for immediate budget reforms. The longer lawmakers wait to take action, the more limited the options and the more dire the situation will be.

Earlier this month, The Heritage Foundation published the “Blueprint for Balance,” which provides a plan to fix the nation’s budget woes. It would balance the budget in just six years and put the national debt on a downward path. All while strengthening national defense, keeping taxes low, and increasing economic freedom.

The House Budget Committee last week adopted its budget resolution for fiscal year 2019. The plan includes more than $300 billion in savings that could be achieved through the process called reconciliation. This is an important down payment toward a more sustainable fiscal budget.

Reconciliation’s ability to bypass the filibuster in the Senate, requiring a simple majority rather than 60 votes, makes it the best and perhaps only chance to achieve major spending reforms this year.

With the long-term budget situation looking worse than ever, Congress cannot let this opportunity waste away. It’s now the Senate’s turn to act.