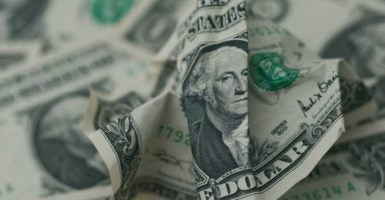 America must kick its addiction to spending before it becomes an insurmountable crisis.

On Thursday, the Congressional Budget Office released its “2017 Long-Term Budget Outlook,” which lays out budget and economic projections for the next 30 years.

The report shows that time to fix the nation’s skyrocketing debt levels is running out and Congress must take immediate action to avert a future fiscal disaster.

A first step is for Congress to reject the temptation to amend the current Budget Control Act caps. Instead, Congress should cut unnecessary domestic programs to strengthen national defense, while staying under the overall Budget Control Act spending limit.

That is a key component to pursuing a truly conservative budget this year that limits the role of the federal government, balances the budget, and begins to pay down the national debt.

The consequences of our massive and rising debt are not only economic. They threaten the safety and security of America.

According to the CBO, high and rapidly rising debt without a credible plan to curb it reduces the United States’ ability to respond to domestic and international problems and increases the chances of a fiscal crisis.

Key findings of the report include:

The 50-year average for debt held by the public is around 40 percent of GDP. As recently as 2007, debt levels were at 35 percent.

Within the next decade alone, the U.S. would spend more on interest payments than on national defense, absent reforms.

If Congress does not change individual income taxes, the CBO warns that over time “average taxpayers at every income level would pay more of their income in taxes than similar taxpayers do now.” Deficits are driven by too much spending, not too little taxation.

Politicians that argue for higher taxes to reduce deficits would rather take more of the American people’s hard-earned money than do the necessary, but politically difficult, work of cutting spending.

The CBO report demonstrates that the time for delay is long past. Congress must act now to pass a conservative budget that puts the nation on a path to balance and stabilizes the national debt.

Earlier this week, The Heritage Foundation released a report that would do just that. “Blueprint for Balance: A Federal Budget for 2018” would reduce the federal debt by nearly $9 trillion and provide a tax cut to Americans.

To achieve these savings, the blueprint makes much-needed reforms to entitlement programs like Social Security, Medicare, and Medicaid. On the discretionary side of the budget, the plan identifies nearly $87 billion in reforms that could be enacted this year, greatly reducing the size of the federal bureaucracy.

The nation’s mounting debt is a ticking time bomb that Congress must take steps to diffuse before it is too late.

Rachel Greszler and Adam Michel contributed to this commentary.