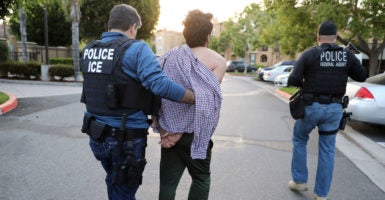 The operation, led by ICE’s enforcement and removal division, netted a total of 101 illegal immigrants who were either criminal aliens, had illegally re-entered the country after being deported, or had an outstanding order of removal.

Immigration officials said 88 percent of those arrested were convicted criminals and 80 percent of them had prior felony convictions for crimes including sexual assault of a minor, possession of child pornography, and aggravated assault.

“The continued results of our Fugitive Operations officers and their law enforcement partners underscore ICE’s ongoing and steady commitment to public safety,” John Tsoukaris, field office director of Enforcement and Removal Operations Newark, said in a statement. “As part of this operation, we continue focus on the arrest of individuals who are criminal and are a threat to public safety and national security.”

The New Jersey operation is the latest in a series of major operations by the increasingly aggressive immigration enforcement agency, which President Donald Trump has empowered as a part of his crackdown on illegal immigration. In a departure from the previous administration’s guidelines, nearly anyone illegally present in the U.S. is now subject to arrest and deportation, regardless of criminal history.

That guidance has led to a surge in interior arrests in the first nine months of the Trump administration. From January to the end of the fiscal year 2017, Sept. 30, ICE made about 110,000 arrests—40 percent more than in did during the same period in 2016.

About a quarter of ICE arrests in fiscal year 2017 were of so-called noncriminal aliens, or illegal immigrants who had not been convicted of other crimes. Critics of the administration’s immigration policies say these arrests are unfairly targeting illegal immigrants who don’t pose a threat to public safety.

Immigrant advocates and some local judicial officials have also complained about the practice of arresting immigration fugitives in courthouses, saying it interferes with the justice system and creates mistrust between law enforcement and immigrant communities.

ICE officials have pushed back against the accusation that the agency is indiscriminately targeting all illegal immigrants regardless of criminality. Ninety-two percent of aliens arrested between Jan. 20 and Sept. 30 had a criminal conviction or a pending criminal charge, had an outstanding order of removal, or had illegally re-entered the U.S. after being deported, acting ICE Director Thomas Homan said last week.