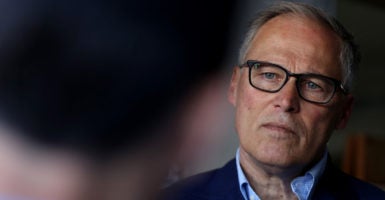 “ICE maintains that cooperation by local law enforcement is an indispensable component of promoting public safety. It’s unfortunate that current local and state laws and policies tie the hands of local law enforcement agencies that want and need to work with ICE to promote public safety by holding criminals accountable and providing justice and closure for their victims,” the agency said Thursday in a statement to The Daily Caller News Foundation.

“Sanctuary policies not only provide a refuge for illegal aliens, but they also shield criminal aliens who prey on people in their own and other communities,” ICE stated. “When ICE officers and agents have to go out into the community to proactively locate these aliens, it puts personnel and potentially innocent bystanders at risk.”

The newly-enacted legislation largely prohibits local law enforcement from asking about an individual’s immigration status or place of birth, with an exception if it pertains to a criminal investigation. State prisons and jails are also barred from honoring voluntary “immigration holds” requested by federal authorities such as ICE, or from alerting them when a migrant is soon to be released from jail.

The rules, signed into law Tuesday, are considered some of the most restrictive in the country.

“Our state agencies are not immigration enforcement agencies,” said Inslee, who is also a Democratic presidential candidate. “We will not be complicit in the Trump administration’s depraved efforts to break up hard-working immigrant and refugee families.”

The legislation is a mandate for all local law enforcement, expanding on a 2017 executive order by Inslee that imposed similar measures that only pertained to state agencies.

Inslee’s signature puts Washington on par with a growing number of deep blue states that have enacted sanctuary policies. A list compiled by the Center for Immigration Studies names at least eight states that enacted laws protecting illegal immigrants from local law enforcement and ICE.

The sanctuary policies brought on by state governments put them in direct conflict with the White House. President Donald Trump has continued to prioritize immigration reform, and the administration is considering a slate of measures that would ratchet up deportation of legal and illegal immigrants.

The sanctuary bill wasn’t the only legislation Inslee, known nationally for his environmental agenda, signed into law in recent days.

The Democratic governor legalized human composting Tuesday, which creates an environmentally friendly alternative to being buried or cremated. Licensed facilities in the state can offer “natural organic reduction,” a process that mixes a dead body’s remains with substances such as straw and wood chips, making it healthier for the soil.