Over 94,000 Illegal Immigrants in Southern Texas Released Into US With Notices to Report, Documents Show 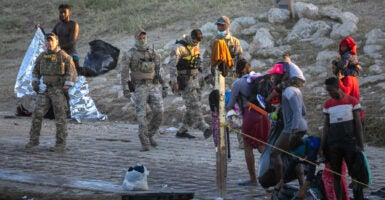 Just over 94,500 migrants who entered the U.S. illegally were encountered by border officials in southern Texas and released into the country with notices to report, according to data obtained by Fox News on Wednesday.

The migrants were encountered in Texas’ Rio Grande Valley and Del Rio sectors since March 20, according to Fox News. Notices to report direct migrants to check in with an Immigration and Customs Enforcement office within 60 days and are different from notices to appear, which require migrants to show up at an immigration court, according to the Asylum Seeker Advocacy Project.

Notices to report provide “mechanisms to require family units released from CBP custody to report to ICE within a specified time,” a Customs and Border Protection official told Fox News. The official referenced data showing 81% of migrants didn’t show up for their immigration proceedings between 2014 and 2020.

Border officials in the Rio Grande Valley were reportedly told to use prosecutorial discretion when processing migrants, allowing them to skip issuing paperwork required for migrants to schedule a court date, Fox News reported on March 21.

“What that means, though, is that they’re making a decision now to apprehend an individual who illegally enters the United States, whether to prosecute them or not before releasing them into the U.S., never to be heard from again,” former acting CBP Commissioner Mark Morgan told The Daily Caller News Foundation. “There’s no reason for them to issue a notice to appear for a case they’re not going to prosecute.”

NEW/THREAD: According to Border Patrol documents provided by a source, the federal gov has released over 70,000 illegal immigrants into the U.S. since August 6, including 31,977 released via parole (temp legal status, eligible for work permits).
94,570 released via NTR since 3/20 pic.twitter.com/ag5OMsYw27

More than 208,000 migrants were encountered at the southern border in August and over 1.3 million have been recorded attempting to illegally enter the U.S. since January, according to CBP data.

It can take multiple hours for border officials to issue a notice to appear for an individual migrant or family unit, Fox News reported. However, when officials decide not to issue notices to appear, they’re supposed to tell migrants to report to local ICE offices at their final destination to complete the process.