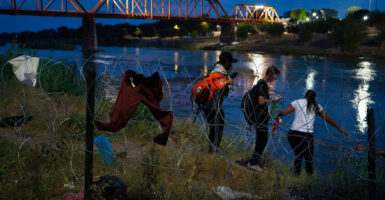 As Massachusetts scrambled to move 50 migrants off Martha’s Vineyard Thursday morning, more than 500 migrants crossed illegally into Eagle Pass, Texas, over a two-hour period, according to Fox News.

Drone images showed three groups of migrants illegally crossing the border in Eagle Pass in the early morning, and this area has seen more than 450,000 illegal crossings in 2022 alone, according to Fox. Eagle Pass residents have less than half the annual income of Martha’s Vineyard residents, according to U.S. census data.

Texas DPS pull over Texas male for human smuggling and transporting 4 illegals in Eagle Pass. Human smuggling cases have spiked in this sector as authorities continue to deal with a large influx of illegal crossings of migrants from 100 different countries @DailyCaller pic.twitter.com/Y6ZUCkOWSq

Florida Gov. Ron DeSantis, a Republican, sent 50 migrants to Martha’s Vineyard Sunday as part of a program of relocating migrants to sanctuary cities, and the move was met with wall-to-wall media coverage and widespread outrage among liberals, some of whom characterized it as a humanitarian crisis. Massachusetts Gov. Charlie Baker, a Republican, said the Martha’s Vineyard community didn’t have the resources to continue housing the migrants long term.

Martha’s Vineyard is a vacation destination and has a permanent population of about 17,000, but that soars to over 200,000 during the summer, according to the Cape Cod Times.

As Massachusetts worked out plans to send in the National Guard and move migrants to a military base, more than 500 migrants illegally crossed the border into Eagle Pass.

More video from our brand new @FoxNews night flying drone with thermal imaging from early this morning. Within just 2 hours in Eagle Pass, TX this AM, we saw 3 large groups totaling 500+ crossing illegally in three spots.
450,000+ illegal crossings in this sector so far this year pic.twitter.com/wkKeTcOBGB

Eagle Pass, which has a population of about 25,000, is the site of large-scale illegal immigration and human smuggling.