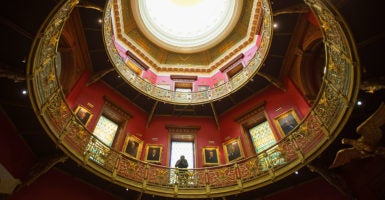 "Relying on government funding could lead to a bias in news coverage," The Heritage Foundation's Justin Bogie says of New Jersey state funding of "community journalism." Pictured: A journalist takes a photo Jan. 9 from an upper level of the main rotunda of the New Jersey State Capitol building in Trenton. (Photo: Carlo Allegri/Reuters/Newscom)

The New Jersey state Legislature set aside $5 million in the annual budget to help fund what it calls “community journalism,” which  critics say raises serious ethical questions regarding the influence it gives government over news coverage.

As local newspapers have seen circulation and advertising steadily decline in the digital age, the traditional business model for small market news outlets is no longer providing the necessary revenue to maintain a financially stable newspaper.

The idea received some support from a major nonprofit educator in the journalism world.

Justin Bogie, a senior policy analyst in fiscal affairs at The Heritage Foundation, said in this case “it’s really up to [state officials] to determine how those funds should be used.”

But Bogie stressed that subsidizing newspapers isn’t a function of government.

“Funding journalism is inherently not a governmental role and therefore journalists should rely on private donations, advertising, and nonprofit grants to fund their coverage,” he said. “Relying on government funding could also potentially lead to a bias in the news coverage that the public receives.”

The New Jersey budget stipulates that the money spent on “community journalism” must come exclusively from the auctioning of public television licenses, which brought in a total of $330 million last year.

Gov. Phil Murphy, a Democrat, signed the budget into law in early July.