How Congress Can Boost Defense Spending Without Busting Budget Caps 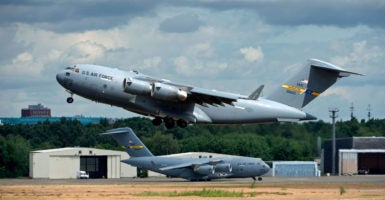 Congress and the president are reportedly working on another backroom budget deal that might raise the Budget Control Act spending caps by up to $200 billion over the next two years.

Congress should not pass another deal that piles more deficit spending onto future generations.

Congress should strengthen and extend spending limits in the Budget Control Act and live within the budget it agreed to in law. The Heritage Foundation’s “Blueprint for Balance: A Federal Budget for 2018” provides the roadmap to do just that.

Some Republicans are likely to support a revision to the Budget Control Act due to the need for additional defense funding. Defense has suffered a disproportionate share of spending cuts in previous years.

In return for defense increases, Democrats are demanding that nondefense domestic programs receive an equal (or close to equal) increase—what they call “parity.”

The need for parity is a myth created to justify greater spending. It wrongly assumes that there is a parity of importance between government programs.

Providing for the common defense is a core duty explicitly enumerated by the Constitution. Some of our current domestic programs, however, are not, and in many cases they could be more effectively and efficiently run by the private sector or by state and local governments.

Instead of raising the Budget Control Act caps, Congress should reform the law to eliminate the unnecessary firewall between defense and nondefense funding. This would allow Congress to prioritize defense spending without busting the overall budget caps.

The Heritage Foundation’s “Blueprint for Balance” makes recommendations for over 100 nondefense discretionary programs that could be reformed or eliminated, saving taxpayers $87 billion in 2018 alone.

>>> Blueprint for Balance: A Federal Budget for Fiscal Year 2018

Over 10 years, the plan would reduce total discretionary spending by $1.7 trillion compared to current law. Not only would these reforms pay for increases to national defense, but they would also reduce favoritism and help unleash new opportunities for all Americans.

Here are five examples of savings that the “Blueprint for Balance” would achieve in fiscal year 2018.

These “New Starts” federal grants encourage localities to build costly, unnecessary, and inefficient transit projects that they can ill afford to operate or maintain.

California’s SMART rail extension project is one such beneficiary. Despite the project’s own determination that it has “low” potential for economic development, performance, and affordable housing growth, the federal government is nonetheless ponying up two-thirds the cost of the project.

With a massive growth in broadcasting options, there is no need for the government to spend nearly half a billion dollars a year on public broadcasting. National Public Radio reports that it already obtains 95 percent of its funding from private sources.

The Hollings Manufacturing Extension Partnership provides subsidies to consultants, manufacturers, and business advisers with the goal of bettering the business practices of small and medium-size businesses. Federal involvement distorts market outcomes and picks winners and losers among businesses. That’s corporate welfare, pure and simple, and it should end.

These are just five of the more than 100 discretionary programs that “Blueprint for Balance” recommends eliminating. There are tens of billions in additional savings that could be used to increase national defense spending—all without raising the budget caps and putting the country deeper into debt.