Brexit Means More Economic Freedom and International Prosperity. It Should Not Be Derailed. 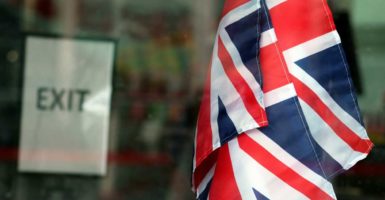 A “Soft Brexit” will end up harming the U.K. (Photo: Jens Kalaene/dpa/picture-alliance/Newscom)

The United Kingdom’s government triggered a two-year period of negotiations to exit the European Union in March.

This “Brexit” process will offer the U.K. the opportunity to forge new trade relationships with nations around the world, including—importantly—the United States, as Heritage Foundation scholars have explained.

Unfortunately, recent press reports indicate that the loss of Prime Minister Theresa May’s parliamentary majority in June 2017 elections may have led some British politicians to get cold feet and consider a partial Brexit or “soft Brexit.”

This might leave the U.K. subject to certain EU regulations and still a party to the EU’s common external tariff arrangement with non-EU nations.

Such a “half-baked” policy would be bad news for the British economy and for the cause of economic freedom. In short, it would be a terrible mistake—Brexit should not be derailed, as Heritage scholar Nile Gardiner recently explained.

As I recently wrote in a Heritage Foundation report, by sparking negotiations to reduce trading barriers between the U.K. and many other nations, Brexit will promote greater economic growth for all parties concerned.

Impediments to free trade and unnecessary regulatory strictures interfere with the free exercise of those rights by inappropriately constraining freedom of contract and reducing the value of property. Economic freedom will rise as unwarranted regulatory and trade restraints are lifted through Brexit-induced reforms.

The benefits of greater economic growth and economic freedom will be sharply reduced, if not totally eliminated, by halfway measures that keep the U.K. partially subject to EU rules and tariff schedules.

Specifically, countries outside the EU will not negotiate seriously with the U.K. if it does not have full control over its tariff schedule and regulatory structure.

In the give-and-take of a trade negotiation, limiting one’s flexibility from the outset is not a good place to start. The U.K. is an attractive trading partner, particularly because it is more open, more competitive, and is less burdened by a prescriptive approach to regulation than the EU.

Soft Brexit would squander this advantage.

One soft Brexit option suggested by some would have the U.K. temporarily join the European Economic Area, or EEA. The EEA currently includes the EU nations plus three nations that are subject to EU regulations but outside the EU customs union—Liechtenstein, Norway, and Iceland.

Having the U.K. become a “taker” of EU rules without retaining a “seat at the table” as a full EU member would be the worst of all worlds for Britain.

The U.K. would lose its ability to try and improve the most intrusive regulatory proposals handed down by EU bureaucrats in Brussels.

Britain would face prospective trading partners “more regulated than ever,” and with no prospects to reduce regulations due to European Economic Area requirements.

[The U.K.] would emerge from these transitional [European Economic Area] arrangements, wondering where all those trade deals and sunlit uplands have gone, only to find ourselves so locked into EU regulatory arrangements that no-one would speak to us. We would therefore be guaranteeing a bad Brexit.

The United States, as a key U.K. trading partner, would also be a big loser from a bad Brexit, which would reduce the potential gains of prospective U.S.-U.K. free trade agreements—benefits that are highlighted in congressional testimony by Gardiner.

Let us hope that the British government remains committed to a “full Brexit”—one that rejects half measures that would make things worse. Bold action will benefit the U.K. and its trading partners, including the U.S., and advance the cause of economic freedom.