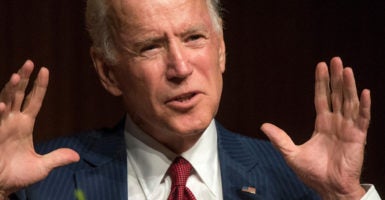 During an interview, Joe Biden turned to assembled sports fans and asked if they thought he should run for president, smiling coyly as he received their uproarious endorsement. (Photo: Jay Godwin/ZUMA Press /Newscom)

Many liberals point to the rising price tag of American political campaigns to support calls for campaign finance reform.

According to Sen. Bernie Sanders, I-Vt., and many others, the billions of dollars donated to political campaigns by individuals and corporations amount to “legalized bribery” on the part of big corporations and the super-wealthy.

But constraining private citizens’ ability to fund political speech would not empower the average citizen. Instead, one of the major beneficiaries would be nationwide media conglomerates and their wealthy owners.

During the nationally televised broadcast of the New England Patriots’ 41-16 routing of the Denver Broncos, NBC cut away from Sports Authority Field in Denver to an Irish pub in Manhattan.

Biden’s appearance was ostensibly to promote his new book, “Promise Me, Dad”—and, in fairness, most of the interview was spent discussing Biden’s relationship with his now-deceased son, Beau, who died in May 2015.

Still, Biden’s continuing political ambitions were not far from the surface. In fact, at one point during the interview, Biden turned to the assembled sports fans and asked if they thought he should run for president, smiling coyly as he received their uproarious endorsement.

This sort of nationwide, prime-time exposure is not cheap—unless, of course, the network gives it away for free, as NBC did Sunday night. A 30-second advertisement on NBC’s “Sunday Night Football” broadcast costs $699,602, making the in-kind dollar value of Biden’s approximately two-minute appearance about $2.8 million.

And Sunday night was just the beginning of the Biden TV cavalcade. Biden served as guest co-host on all four hours of NBC’s morning show Monday and was set to appear on “The Late Show” with Stephen Colbert on CBS on Monday night.

If Biden does decide to throw his hat in the 2020 presidential ring, this sort of free publicity will certainly be a boon to his electoral fortunes. That’s an advantage doled out at the pleasure of NBC and the two major corporations, Comcast and General Electric, that jointly own NBC Universal.

Proponents of campaign finance reform claim that by severely capping—or completely eliminating—the contributions of private citizens, corporations, and interest groups, electoral competitions will be won and lost on the basis of policy and candidate quality, not money raised and donors wooed.

They contend that such restrictions would also ensure that candidates would be beholden primarily to voters, rather than donors, once they assume office.

However, campaign finance reform does not attenuate every voice or constrain every corporation. Curtailing campaign contributions would radically amplify the volume of media companies by muffling all the other voices in the public square.

Without being able to raise and spend money freely, politicians would be beholden to the media corporations that own the airwaves and inkwells.

Fortunately, the Supreme Court has recognized that the Constitution’s protection of freedom of speech is worth little if people are not free to broadcast their speech.

NBC is free to invite Biden, Sanders, Sen. Kamala Harris, D-Calif., or anyone else it chooses onto its television programs. But, thanks to the Supreme Court’s decision in Citizens United v. Federal Election Commission, competing voices can also get a hearing.