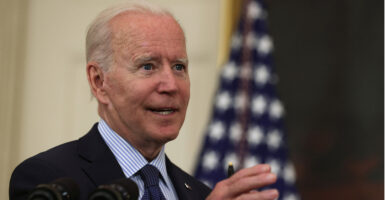 In his first 100 days in office, President Joe Biden, seen here Tuesday, has revealed a misguided agenda that disregards basic freedoms, such as freedom of speech, conscience, and religion. (Photo: Alex Wong/Getty Images)

Ryan Bangert is senior counsel and vice president of legal strategy for the Alliance Defending Freedom (@Alliance Defends). He formerly served in the offices of the Texas and Missouri attorney general's offices.

The first 100 days of a president’s term can reveal a new administration’s priorities.

Unfortunately, the first 100 days of the Biden administration—which the president marked on Thursday, the day after his address to a joint session of Congress—reveal an executive branch determined to advance an aggressively intolerant ideology.

President Joe Biden claims to promote “unity” and “serving all Americans,” but his administration’s divisive actions undermine women’s rights and safety, and trample on Americans’ freedom of speech, conscience, and religion.

The president has issued 40 executive orders to date. On just his first two days in office, Biden signed 17 executive orders—more than four times the number of first-day orders signed by his four predecessors combined.

The president has used that burst of activity unilaterally to advance a radical agenda.

One of those orders, for example, directs federal agencies to reinterpret federal laws that prohibit sex discrimination to include gender identity and sexual orientation as protected classes, contrary to the text and historically accepted understanding of those laws.

With his executive order, the president sidestepped the legislative process and attempted to shut down discussion on a highly controversial topic.

Beyond usurping the role of the legislative branch, this executive order undermines the privacy rights and safety of women.

The order also undermines freedom of speech and religion by telling agencies to enforce federal law, including Title IX and the Fair Housing Act, in ways that could violate the rights of religious schools and universities.

In the wake of Biden’s executive order, several states have passed laws protecting women’s sports, and numerous other states are considering similar laws. States are lining up to defend privacy, safety, and fair competition for women from Biden’s attacks, making it clear that his actions do not reflect the interests of everyday Americans.

Moving beyond executive orders, Biden also has made appointments that undermine First Amendment freedoms. Notably, he appointed former California Attorney General Xavier Becerra as his secretary of the Department of Health and Human Services.

Becerra is a left-wing politician who spent years litigating against a group of Catholic nuns called the Little Sisters of the Poor, trying to force it to pay for abortion-inducing drugs through the group’s health care plan. He did so despite the fact that paying for such drugs violated the Little Sisters’ religious faith. The Supreme Court ruled in July 2020 in favor of the nuns.

Becerra has also pushed for taxpayer funding of transgender surgeries and has even expressed his support for performing these irreversible surgeries—which can lead to sterilization—on minors.

Furthermore, Biden has endorsed the euphemistically named Equality Act, which poses ever more serious threats to Americans’ basic freedoms. The Equality Act would codify “sexual orientation and gender identity” as protected classes. That change would bake into the federal code policies that, like Biden’s executive orders, would upend basic protections for women and children, and would significantly undermine freedom of speech and religion.

The Equality Act would force women’s emergency shelters to allow biological males to share showers and sleeping areas with vulnerable women. It would compel health care professionals to provide cross-sex hormones and transgender surgeries, even if that violates their deeply held moral beliefs. And it would endanger women’s sports at every level.

Biden’s first 100 days in office reveal a misguided agenda that disregards basic freedoms, such as freedom of speech, conscience, and religion. The extremist ideology evident in appointees such as Becerra, his executive orders, and his support for laws like the Equality Act show that he is determined to force all Americans to accept, affirm, and even endorse beliefs held by some cultural and political elites—regardless of whether or not most other Americans share those beliefs.

But Americans are going to court to challenge the Biden administration’s extremist agenda.

On April 15, a Christian college represented by Alliance Defending Freedom filed a lawsuit against Biden and against the Department of Housing and Urban Development, pushing back on the administration’s attempts to force colleges to open women’s housing and sports teams to biological males.

The next day, on April 16, three Christian colleges also represented by Alliance Defending Freedom sought to intervene in a lawsuit in Oregon to defend Title IX protections that allow religious colleges to operate consistent with their faith.

While brought by private plaintiffs, the lawsuits illustrate the challenges religious schools will face if the Biden-supported Equality Act were to become law.

For the past 100 days, the new Biden administration has relentlessly pushed an aggressive and intolerant ideology, but those same 100 days also show a strong, unified coalition of Americans who are willing to stand up for their rights and freedoms.

The first 100 days of a new administration also often reveal what is to come. If Biden really wants unity, and really seeks to be a president for all Americans, he would do well to listen to all Americans, instead of just a few radical activists.