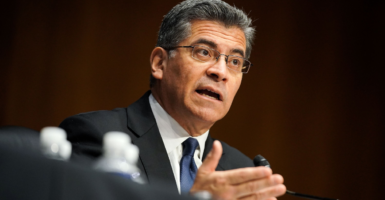 Xavier Becerra, nominee for secretary of health and human services, answers questions during his Senate Finance Committee nomination hearing Feb. 24, 2021, in Washington, D.C. Many organizations and members of Congress are calling for his nomination to be rejected—and with good reason. Becerra is unfit and unqualified to serve in this vitally important Cabinet position. (Photo: Greg Nash/POOL/AFP/ Getty Images)

Many organizations and members of Congress are calling for his nomination to be rejected—and with good reason. Becerra is unfit and unqualified to serve in this vitally important Cabinet position.

Those unfamiliar with Becerra’s record would see, at surface level, a resume of longtime public service, including the California State Assembly, the U.S. House of Representatives, and his current post, attorney general of California (a role he assumed when his predecessor Kamala Harris won her election to the U.S. Senate in 2017).

Decades of public service at the state and federal level shouldn’t be minimized. But it is also not an immediate qualification to lead a massive government agency that oversees a wide variety of both domestic and internationally-focused operations, ranging from Medicare and Medicaid to refugee resettlement, food and drug regulation, the Centers for Disease Control and Prevention, and global affairs.

Becerra’s record does not inspire the confidence Americans deserve to have for a Cabinet secretary tasked with such an enormous responsibility.

Beyond his lack of experience in issue areas that are particularly important during a pandemic response, Becerra has proven himself to be a hyperpartisan culture warrior with an outsized hostility to fundamental freedoms, including the right to life and religious liberty.

This abysmal record was on full display during recent confirmation hearings in the Senate Health, Education, Labor and Pensions and Senate Finance committees.

In the Health, Education, Labor and Pensions Committee, Sen. Mitt Romney, R-Utah, pressed Becerra on his opposition to the federal partial-birth abortion ban during his time in Congress.

Becerra demurred on a direct answer, saying he thinks we can find some common ground on these issues. Romney, nonplussed, replied that on the issue of partial-birth abortion, “we’re not going to reach common ground there.”

In an answer to a question from Sen. Mike Braun, R-Ind., about taxpayer funding for abortion and abortion providers, Becerra committed to follow the law, such as the Hyde Amendment (language applied to annual appropriations legislation that prohibits taxpayer dollars from being spent on most abortions).

However, this answer inspires little confidence for two reasons. First, congressional Democrats and Biden have committed to try to repeal policies like the Hyde Amendment going forward. And federal agencies can use their rule-making authority to enforce—or rescind—regulations that are meant to ensure that individuals and organizations follow both the letter and the spirit of the law.

To this end, Becerra can be expected to do the abortion lobby’s bidding and rescind Trump administration policies that sought to achieve this end, such as:

When asked by Sen. Steve Daines, R-Mont., to name a single restriction on abortion that he would support, Becerra declined.

Sen. James Lankford, R-Okla., pressed Becerra on his record against conscience rights. He pointed out the Obama administration’s lackluster record enforcing various federal conscience rights statutes and noted the Trump administration’s efforts to correct this problem, which included establishing a Conscience and Religious Freedom Division within the HHS Office for Civil Rights.

The division took numerous corrective actions against entities that violated federal conscience law, including disallowing $200 million in Medicaid funding to the state of California for mandating that health insurance plans—including church plans—cover elective abortions. Lankford asked if Becerra would keep the conscience division in place at HHS, but Becerra failed to provide an answer.

Becerra danced around the question. He would not provide a clear answer about how the exemption for people like the Little Sisters of the Poor somehow impedes California’s ability to administer Obamacare.

While the Little Sisters have repeatedly won at the Supreme Court, those victories stem from administrative action that could be undone by a secretary—such as Becerra—hostile to rights of conscience and religious liberty.

Sasse pointed out the hypocrisy of prosecuting Daleiden but not prosecuting animal rights activists who used the same tactics. Becerra could not explain the disparate treatment.

The list of Becerra’s years of hostilities to the cause of life, conscience, and free speech is unfortunately extensive. Equally unfortunate is Biden’s calculated decision to nominate someone with these priorities during a global pandemic.

Biden’s repeated overtures to unity and bipartisanship ring hollow when they are followed by such a controversial nomination. No Republicans voted to advance Becerra’s nomination to the full Senate.

Not one to mince words, Sasse issued a sharp rebuke following the committee hearing:

This isn’t complicated: In the middle of a deadly global pandemic, Americans want their Department of Health and Human Services to be focused on health and human services—not culture wars.

If bullying nuns and trampling First Amendment rights could magically cure COVID, Becerra would be qualified. He’s not right for the job and the Senate needs to reject this hyper-partisan nomination.

Sen. Bill Cassidy, R-La., expressed serious misgivings about Becerra’s lack of experience, noting that “his qualification to be HHS Secretary, seem to be minimal beyond suing HHS” and pointed out that Becerra repeatedly displayed a lack of familiarity with specific aspects of HHS duties. “Being HHS Secretary should not be a learn on the job position.” Cassidy is, of course, correct.

As America grapples with the continued challenges of a global pandemic, vaccination rollout, school reopenings, and economic recovery rightly are at the forefront of the pandemic response. And other policy concerns—like health care reform, immigration, life, and religious freedom—loom large.

Becerra is simply not qualified for the position he’s been nominated to fill. Even if he were, his years of hostility to fundamental rights of conscience and free speech demonstrate a clear record that is incompatible with leading an agency whose role includes protecting those very rights.