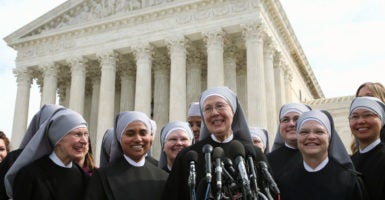 Regrettably, Wednesday’s victory is unlikely to be the end of the government harassment of the nuns. Pictured: Mother Loraine Marie Maguire, of the Little Sisters of the Poor, speaks at the Supreme Court on March 23, 2016, in Washington, D.C. (Photo: Mark Wilson/Getty Images)

Why are some in the government so determined to force a group of Catholic nuns to violate their beliefs?

That’s a question we all should be asking as we celebrate Wednesday’s Supreme Court victory for the Little Sisters. Regrettably, Wednesday’s victory is unlikely to be the end of the government harassment of the nuns.

The Little Sisters of the Poor—a religious organization run by an order of Catholic nuns dedicated to serving the sick and elderly—have spent nearly a decade locked in a battle for religious liberty.

The Supreme Court on Wednesday handed down a victory for the Little Sisters by holding that the Trump administration had the authority to exempt them and similar organizations from the Department of Health and Human Services mandate requiring them to provide contraceptive coverage to employees, and that it did so in a proper manner.

Unfortunately for the nuns, this victory might not mean the end of their legal battles. The case is likely to come before the Supreme Court again.

How Did We Get Here?

The backstory is long and winding, spanning more than seven years of complicated litigation. But it’s certainly worth reviewing.

In 2011, after Congress passed the Affordable Care Act, federal agencies charged with implementing the law enacted regulations requiring employers who offer health insurance to provide coverage for Food and Drug Administration-approved contraceptives. They ultimately included four that the FDA label says could cause an early abortion and which were opposed by some groups on religious or moral grounds.

Those regulations came to be known as the “contraceptive mandate.”

The contraceptive mandate initially included exemptions for churches and an “accommodation” for certain religious organizations, but still required many others with sincere religious objections to provide coverage.

In the 2014 case of Burwell v. Hobby Lobby, the Supreme Court ruled that the Religious Freedom Restoration Act required the government to at the very least offer the accommodation offered to religious nonprofits to closely held businesses with similar religious or moral objections to the coverage.

But then there was the question of whether the “accommodation” actually protected the religious liberty of objecting groups. A number of the religious employers—including the Little Sisters of the Poor—argued that it required them to actively participate in providing the objectionable contraceptives.

In 2016, the Supreme Court in Zubik v. Burwell (the Little Sisters case) basically told both the religious organizations and the federal government to work out their disagreements and find a solution. In doing so, the court did not rule on the merits of whether the Religious Freedom Restoration Act required the organizations to be exempted from the mandate.

Subsequently, the Trump administration came into office and, in 2017, issued new regulations that significantly expanded the exemptions to the contraceptive mandate. The exemptions would now cover “not only churches and their integrated auxiliaries, but also other not-for-profit, education, and for-profit entities that have sincere religious or moral objections to providing contraceptive coverage.”

The Little Sisters of the Poor and similar groups would not have to provide the objectionable contraceptive coverage. It seemed as though the poor nuns would finally be left to their work of caring for “the least of these.”

But alas, Pennsylvania and New Jersey sued the Trump administration, contending that the federal agencies that issued the new exemptions didn’t have the authority to protect the Little Sisters, and that the agencies didn’t follow the correct rules.

The Little Sisters of the Poor found themselves back before the Supreme Court, intervening to protect the new rules and the religious accommodations they received under them.

On Wednesday, the Supreme Court reversed the lower courts and held that the Trump administration had the authority to broaden religious exemptions to the contraceptive mandate. Additionally, the applicable agencies had clearly followed the proper process for issuing the new rules.

In the words of Justice Clarence Thomas, who wrote the majority opinion, the same provisions of the Affordable Care Act that granted the federal agencies sweeping authority to create the contraceptive mandate also “[empower them] to identify and create exemptions” to it.

It’s not the court’s job to impose limits on an agency’s discretion to exempt religious organizations when the statute itself does not impose limits.

The closing paragraphs of Thomas’ opinion aptly summarized both the court’s decision and the arduous nature of the Little Sisters’ fight to protect their rights of conscience:

For over 150 years, the Little Sisters have engaged in faithful service and sacrifice, motivated by a religious calling to surrender all for the sake of their brother.

[T]hey commit to constantly living out a witness that proclaims the unique, inviolable dignity of every person, particularly those whom others regard as weak or worthless.

… But for the past seven years, they—like many other religious objectors who have participated in the litigation and rulemakings leading up to today’s decision—have had to fight for the ability to continue in their noble work without violating their sincerely held religious beliefs.

After two decisions from this Court and multiple failed regulatory attempts, the Federal Government has arrived at a solution that exempts the Little Sisters from the source of their complicity-based concerns—the administratively imposed contraceptive mandate.

We hold today that the Departments had the statutory authority to craft that exemption, as well as the contemporaneously issued moral exemption. We further hold that the rules promulgating these exemptions are free from procedural defects.

The court did not, however, decide the question of whether these new exemptions were compelled by the Religious Freedom Restoration Act, or whether they were “arbitrary and capricious,” as Pennsylvania and New Jersey had argued.

The unfortunate reality is that the saga of the Little Sisters of the Poor is likely still not over.

As Justice Samuel Alito noted in his concurring opinion, Pennsylvania and New Jersey are “all but certain” to immediately pursue the arguments the court declined to decide in this case; namely, whether the new rule is “arbitrary and capricious.”

For that reason, Alito would have saved the Little Sisters of the Poor a future legal battle by deciding that the new rule is compelled by the Religious Freedom Restoration Act, and therefore cannot be arbitrary and capricious. But, as it now stands, the majority did not rule on that issue, and it will now be litigated in the lower courts.

When that question inevitably comes back before the Supreme Court in the future, the court may be more divided than it was in this case. Justices Elena Kagan and Stephen Breyer indicated in their concurrence that they think the new rules “give every appearance of coming up short” of the standard of “reasonableness.”

Even worse, if a hostile administration comes to Washington, D.C., we can expect the Trump administration protections for the Little Sisters to be watered down or eliminated.

That highlights the need for legislation, not just regulation, to permanently protect the nuns.

It also reminds us of yet another problem with the Affordable Care Act.

Regardless, the court’s ruling is no doubt good news for the Little Sisters and others who have fought so long and hard to ensure their religious liberty rights are protected.

As Kay Coles James, president of The Heritage Foundation, noted: “This ruling preserves fundamental religious liberties and is good news for all Americans, regardless of faith.”

The war to protect religious liberty might still be ongoing, but at least this particular battle has been won. Wouldn’t it be nice if those in positions of government authority stopped their meddling with these nuns?