The Little Sisters of the Poor Are Back at the Supreme Court, Needlessly So 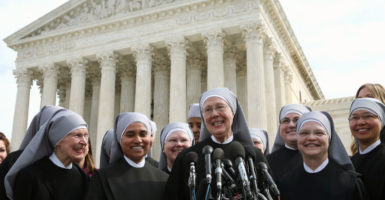 The Little Sisters of the Poor are merely asking that the federal government honor the broad religious exemption and refuse to require them to carry out President Obama’s original contraceptive mandate. Pictured: Mother Loraine Marie Maguire, of the Little Sisters of the Poor, speaks to the media after arguments at the Supreme Court, March 23, 2016. (Photo: Mark Wilson/Getty Images)

The Little Sisters of the Poor—a religious order that serves the poor and elderly—will be back at the Supreme Court on Wednesday for the second time about the same issue; namely, former President Barack Obama’s infamous Affordable Care Act contraceptive mandate, enacted about a decade ago.

The court will hear oral arguments via telephone, due to restrictions related to the COVID-19 pandemic. The road here has been long—nearly eight years—and a handy demonstration of how government mandates resulting in lengthy litigation, ostensibly over the same issue, can be simultaneously both foolish and important.

Obama’s Patient Protection and Affordable Care Act required employers that provide their employees with health insurance to cover birth control, except for houses of worship and their integrated auxiliaries, which were granted an exemption.

Employers with deeply held religious convictions, such a the Little Sisters of the Poor and the Hobby Lobby crafts store chain, were not exempt. (Hobby Lobby brought its case to the Supreme Court separately and won an exemption under the Religious Freedom Restoration Act.)

Though the Little Sisters and a handful of others brought their case to the Supreme Court, the court tossed them back to their respective states.

A 2016 article in The Daily Signal interpreted this optimistically:

In a unanimous opinion, the Supreme Court ‘vacated,’ meaning erased, all of the lower court cases and required them to reconsider the claims brought by the Little Sisters of the Poor and others that the regulations promulgated pursuant to Obamacare violate their religious exercise in light of the government’s admission that it could indeed provide contraceptive coverage without the Little Sisters’ collaboration.

In 2017, the Trump administration tried to swoop in, and it issued a new rule with an even broader religious exemption that protected the Little Sisters and  similar groups from having to bend to the now-spurned contraception mandate.

Rather than allow that to provide needed relief to the Little Sisters and forget an entire asinine episode in which a health care program was so zealous it actually sought to force nuns to provide birth control, Pennsylvania and New Jersey sued the federal government, saying it had gone too far in broadening the nuns’ exemption.

Since they had a compelling interest, the Little Sisters intervened, this time acting as a voluntary substitute, holding firm against a tidal wave in the form of a progressive, anti-religious agenda—not unlike what their faith requires them to do when the Apostle Paul said, “To be on the alert, stand firm in the faith.”

The case has bounced back and forth between a couple of lower courts via interventions and appeals, and three years later, it has landed back before the Supreme Court.

That a couple of state governments should be so authoritarian as to compel a group of celibate caregivers to facilitate contraceptive coverage for fertile employees—who theoretically could not find any at any other public or private entity in the U.S.—is so absurd on its face that it’s hard to see how any lower court could have ruled in their favor.

It’s also important to remember: Women remain free to access the drugs and devices at issue in the mandate, and the Trump administration’s new rule does not affect the plethora of programs that subsidize contraception at the federal, state, and local level.

What the Little Sisters of the Poor are asking the Supreme Court is so simple and so pure an example of why religious liberty is—or should be—paramount in the United States that it’s incredible they’re still litigating this case after so many years.

They are merely asking that the federal government honor the broad religious exemption and refuse to require them to carry out Obama’s original contraceptive mandate, which forced them to provide something that no one has ever asked for and that goes against the very core of their being.

That the Little Sisters are knee-deep in the COVID-19 pandemic—caring for elderly people dying of the disease and risking their own health to do so—while also standing firm for the religious freedom the First Amendment guarantees them says as much about the strength of their integrity as it does the strength of their legal case.

I would be shocked if the Little Sisters were not handed a sweeping victory at the Supreme Court, such is their legal standing. And that would be so even if their spiritual humility and courage of conviction were irrelevant to their case.

As incredible as it is to presume that the government had an interest in ensuring every woman had access to the birth control she needed, the idea that the Little Sisters of the Poor, of all people, should be forced to provide it is even more outlandish.

In fact, it’d be laughable if they hadn’t been fighting for this exemption for eight years now.

I can’t think of a better example of what governments should refrain from doing more than trying to force a religious group that’s not only celibate, but serving the poor, to act against the very convictions that compel it to do the very work we as a society need them to do.