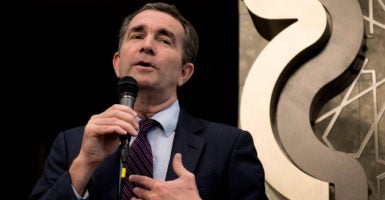 In the Virginia gubernatorial race Tuesday between Lt. Gov. Ralph Northam and Ed Gillespie, immigration was a key issue.

Northam, 58, the 40th and current lieutenant governor of Virginia, won, and had 925,203 votes or 51.8 percent of the vote with 74 percent of precincts reporting, according to The New York Times.

Gillespie, 56, a former chairman of the Republican Party of Virginia and the Republican National Committee as well as counselor to President George W. Bush, had 869,346 votes or 46.8 percent with 76 percent of the precincts reporting, according to The New York Times.

“Clearly immigration has played a significant role in the campaign,” Mark Krikorian, executive director at the Center for Immigration Studies, a nonpartisan immigration research organization, told The Daily Signal in a phone interview, adding:

Don’t take my word for it, ask Ralph Northam. He was first boasting about having cast the deciding vote to kill an anti-sanctuary bill in the Legislature when he was lieutenant governor.

After Gillespie aired an ad that claimed that Northam cast a deciding vote on Feb. 22 in favor of sanctuary cities, Krikorian said Northam’s stance on immigration changed.

[Since] Gillespie’s ads criticizing MS-13 and sanctuary cities, Northam has now flipped and said that if some city did declare it a sanctuary, he would act to stop it if he were governor.

In an article published Nov. 1, the Richmond Times-Dispatch reported:

In an interview Wednesday with the Norfolk TV station WAVY, Northam said for the first time that, under certain circumstances, he would sign a bill similar to the one he voted against this year, a vote that spawned a wave of ominous ads from the Gillespie campaign linking Northam to the Latino gang MS-13.

‘If that bill comes to by desk … I sure will. I’ve always been opposed to sanctuary cities. He knows that,’ Northam said of Gillespie …

The Center for Immigration Studies lists Arlington County and Chesterfield County in Virginia as sanctuary cities.

Ralph Northam’s gutless, politically senseless, and morally debased decision yesterday to openly backtrack on his commitment to standing up for immigrant families is a picture-perfect example of why Democracy for America never endorsed him in the primary … It’s also why, today, we’re announcing that we will no longer do any work to directly aid Northam’s gubernatorial efforts.

Ezra Levin, co-founder of Indivisible, which describes itself as having a “mission … to fuel a progressive grassroots network of local groups to resist the Trump agenda,” tweeted this about Northam’s position:

Hans von Spakovsky, a senior legal fellow at The Heritage Foundation, agrees the immigration issue was influential in the Old Dominion’s 2017 governor’s race.

“Given the fact that Virginians are concerned about sanctuary cities like Virginia Beach and with recent reports of noncitizens voting in Virginia elections, there’s no question that immigration was probably a factor in how Virginians voted,” von Spakovsky told The Daily Signal in an interview.

President Donald Trump made his support of Gillespie no secret on social media.

.@EdWGillespie will totally turn around the high crime and poor economic performance of VA. MS-13 and crime will be gone. Vote today, ASAP!

Ralph Northam will allow crime to be rampant in Virginia. He’s weak on crime, weak on our GREAT VETS, Anti-Second Amendment….

Trump also participated in a robo call for Gillespie on Tuesday.

“Ed will protect your family from crime, drugs, and violence—something Northam will never do. And Ed loves the vets, loves the military, and loves your Second Amendment,” Trump said during the call.

Ken Cuccinelli, the 46th attorney general of Virginia from 2010-2014, told The Daily Signal in an interview that Democrats worked to make the gubernatorial race about race and immigration. Gillespie’s focus on MS-13, a gang with ties to illegal immigrants, drew criticism from some.

“The other side tried to turn it into a race-baiting thing,” Cuccinelli said, adding:

The problem is, it wasn’t race-baiting, it was fact-telling, and you know, they don’t deal well with the truth, and so it began an interesting back and forth, [but] they overreacted so badly that it really played into Gillespie’s hands to then push again the factual subject, [that] Northam had a vote where he supported sanctuary cities, arguably, and then Northam flip-flopped on it.

The former Virginia attorney general said an ad that came out by the Latino Victory Project in opposition to Gillespie further illustrated how the left distorted Gillespie’s stance on immigration.

“It falls in the category of the left just going overboard … the other side has done it with some of their over-the-top, basically false bigotry charges, and that ad was the granddaddy of them all on that front,” Cuccinelli said.

Logan Churchwell, communications and research director at Public Interest Legal Foundation, a law firm centered on election integrity, told The Daily Signal in an interview that the truck ad illustrated how liberals framed the immigration discussion.

“That truck ad was despicable, and I think it puts in video form how some political interests are comfortable leveraging and exploiting first generation immigrant populations to basically generate a political outcome in the elections that they are hoping for,” Churchwell said.

The ad was taken down Oct. 31, and Cristóbal J. Alex, president of the Latino Victory Fund, said in a statement posted on Twitter that the ad “held a mirror up to the Republican Party, and they don’t like what they see.”

The issue is not going away anytime soon, said Krikorian at the Center for Immigration Studies.

Continual attention to immigration enforcement as an anti-gang tool is going to be essential, and Northern Virginia is going to have a very direct interest in national immigration policy trying to limit the influx of central American illegal immigrants, because this area is, after Los Angeles, the No. 2 location in the country for Central Americans and … their communities inevitably serve as cover and incubators for these kinds of national criminal gangs, MS-13 [being] just the most notorious of them.