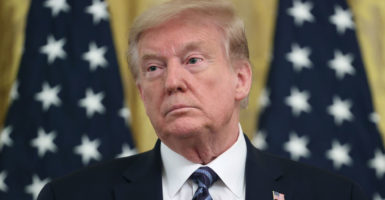 The decision was the latest in the ongoing court battle between the Trump administration and the city of Chicago.

The executive branch’s authority on immigration policy does not include withholding funds from cities that were allocated from the legislative branch, the appeals court found.

“Such a concentration of power would allow tyranny to flourish, and our system of government is wisely set up by the Founders to foreclose such a danger,” wrote Judge Ilana Rovner, writing on behalf of the three-judge panel, in a 95-page ruling.

“The separation of powers is a foundation of our government, not a formality to be swept aside on the path to achieving goals that the executive branch deems worthy,” Rovner continued. “Rather than an exercise of authority granted to it by the legislature, the conditions imposed here are an executive usurpation of the power of the purse.”

The court battle dates back to 2017, when the Department of Justice moved to withhold Edward Byrne Memorial Justice Assistance Grants from Chicago—a city that for years has refused to honor ICE detainer requests, share information, or otherwise cooperate with immigration agents. Then-Mayor Rahm Emanuel sued the DOJ in response.

“When I got the news from our corporation counsel earlier this morning, I let out a cheer,” Lightfoot said, according to CBS Chicago. “This is a great victory, not only for Chicago, but for our immigrant and refugee communities everywhere in the country.”

The grant money at stake was a mere fraction of 1% of Chicago’s budget, but the drawn-out court fight indicated that the lawsuit was much more for Chicago leaders than receiving federal funds.

The Justice Department has the option of appealing the decision to the Supreme Court, where the administration has enjoyed more success with challenges to its immigration agenda, but it’s not clear yet how the DOJ will proceed.

Lightfoot is proud of Chicago’s status as a sanctuary city, and her administration has specifically instructed local law enforcement not to work with ICE agents in many circumstances.

The city does not honor ICE detainer requests, and has even allowed illegal aliens charged of heinous crimes to walk free without notifying the agency—which has led to some gruesome consequences.

Chicago authorities, for example, refused to honor an ICE detainer request on an illegal alien in June 2019, and instead released him back into the public. That individual went on to allegedly sexually assault a toddler in a public bathroom.

In response to public backlash over the alleged assault, Lightfoot put blame back on ICE.

“They’re critical because we have said very clearly we are a welcoming city, a sanctuary city,” she said in February in response to accusations that her government could’ve prevented the crime. “Chicago Police Department will not cooperate with ICE on any immigration-related business.”