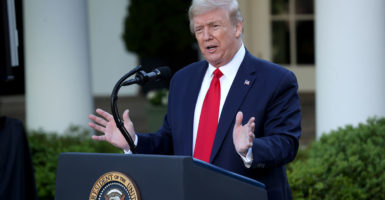 President Donald Trump answers questions during the daily briefing of the coronavirus task force in the Rose Garden of the White House April 27, 2020, in Washington, D.C. (Photo: Win McNamee/Getty Images)

President Donald Trump suggested Tuesday that he may withhold federal bailout funds from states with cities that refuse to cooperate with federal immigration authorities.

Trump was asked at a White House event with business leaders about the idea of another round of stimulus money for U.S. taxpayers. The president said he liked the concept of payroll tax cuts, then shifted to the possibility of bailout funds for state governments.

“The problem with the states is we’re not looking to recover 25 years of bad management and give them the money they lost. That’s unfair to other states,” Trump said.

“If it is COVID-related, we can talk about it, but we want certain things also, including sanctuary city adjustments,” he continued. “We have so many people in sanctuary cities, which I don’t even think they are popular even by radical left because people are being protected that shouldn’t be protected and a lot of bad things are happening with sanctuary cities.”

The president continued to suggest that, for state governments to be eligible for more bailout aid, they would have to clamp down on their cities that refuse to work with Immigration and Customs Enforcement.

“If we are going to do something for states, I think they probably want something having to do with sanctuary cities and other different points that we can discuss a little bit later on,” he said.

Trump has previously tried to withhold funds from sanctuary cities.

The 2nd U.S. Circuit Court of Appeals ruled in February that the White House is legally allowed to withhold millions of dollars in federal law enforcement grants from states and other localities that refuse to work with ICE, delivering a major victory for the administration in its fight against sanctuary jurisdictions.

Democrats, however, have tried to stop the administration from tying coronavirus aid to immigration policy.

The CARES Act, a $2.2. trillion stimulus relief package for Americans suffering from the coronavirus, included millions in law enforcement grants. Language in the bill specifically forbid Trump from withholding those funds from jurisdictions that have sanctuary policies in place.

In response to the coronavirus pandemic, the Trump administration has closed the northern and southern borders to all “nonessential” traffic, and the president has issued an executive order that bars many green card applications from foreign nationals living abroad.