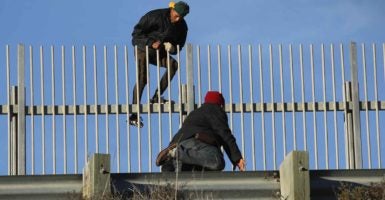 Immigrants climb over a secondary fence after climbing over the main U.S.-Mexico border fence on Dec. 2, 2018, from Tijuana, Mexico. Numerous members of the migrant caravan crossed over from Tijuana to San Diego but were then quickly taken into custody by U.S. Border Patrol agents. (Photo: John Moore/Getty Images)

When talking about the immigration issue, more focus is often given to those coming into the country illegally, while citizens who live in border towns and cities are more often left out of the conversation. On today’s podcast, I speak with Chris King, the first vice chairman of the Pima County Republican Party, who talks about what it’s like to live in a border area, and why Pima County voted not to become a sanctuary city. Listen to our interview on the podcast, or read the lightly edited transcript below:

Rachel del Guidice: We’re joined today on The Daily Signal Podcast by Chris King. He’s the first vice chairman of the Pima County Republican Party. Chris, thank you so much for being with us today.

Del Guidice: Just to get started, you’ve lived in Arizona, you see the border crisis up close and personal. Can you tell us a little bit about what you see on a day-to-day basis?

King: I guess the thing we see on a day-to-day basis is the crime rates are staying constant. We see [illegal immigrants] coming through daily. We see our City Council protecting them over our citizens. We see our county board of supervisors prioritizing them over our own American citizens. And we see that regardless of how many people step up and say, “We’ve had enough,” the crime will still continue.

The border is not secure regardless of whatever the mainstream media tells you. The people who live here, some of them are moving away. They’re tired of dealing with a government, and that’s all levels, that doesn’t want to actually address the issue.

King: Pima County is a rather large County. It’s 9,200 square miles and with that proposition it was voted down overwhelmingly.

The majority of the people that supported it were within a 4-mile segment of the community. It was right around the areas of our internal transit system, which is right in the university. Outside of that area, it was voted down overwhelmingly.

The sanctuary city policies, they don’t work. They don’t work anywhere. You can see in California, which has recently declared itself a sanctuary state, they say that sanctuary cities are safer because crime rate goes down. Well, that’s been proven to be categorically false.

We just look at the different issues that come up around it and we have to truly prioritize, what is the issue? What is government’s purpose?

Del Guidice: It was recently announced, I think it was in January, so a little while ago, that the 100 miles of border wall, that was a landmark, that had finally reached 100 miles.

Because you live in the area here in Arizona, have you seen a difference with that mile being reached or is it more of a day-to-day situation here that’s going on where you’re just working with the illegal immigration problem and you haven’t seen much of a difference? So what does that look like?

King: Where we live in the Tucson area, it’s not really so much of an issue. Where other people live in the city and the county, it is an issue. … [illegal immigrants] rarely migrate through areas where they’re more likely to be reported, caught, and basically sent back.

However, we’re one of the largest sectors in the nation and we have a very large processing facility here in Tucson. If you go to the areas in Pima County that are very open, you will see a lot more process, a lot more migration of the [illegal immigrants] through the desert. You’ll see the crime that transpires because of it as well.

Del Guidice: … The Arizona [Capitol] Times, they recently reported that lawmakers are filing about resolution that would ask Arizona voters to decide whether the Arizona Constitution should bar local areas, local jurisdictions, from limiting their compliance with federal immigration efforts. So basically being an in-between person. … What is your perspective on that?

Del Guidice: The acting Customs and Border Protection commissioner, Mark Morgan, he recently announced that border crossings are down for the first time in quite a while.

I think he said only around 36,697 illegal immigrants were stopped at the border. Only about 29,000 were arrested, and this number, I think, has been the lowest it’s been since February 2018.

What is your perspective on this? Have you seen a difference as well?

King: [I] haven’t really seen a difference up here, but again, we don’t necessarily live in that area where they’re going to transit through. I guess if their number of arrests and the number of detentions and captures are down, I guess that means the policies that are being put in place are actually working.

Have you seen that happening in this area where Mexican nationals will try to come over and then the Mexican government sometimes will apprehend them and send them back?

King: Several times our local news actually reports on waves of [illegal immigrants] or other nationals coming, trying to attempt this area.

So from what we’re seeing with the Mexican Consulate and everything else, and the media reporting, is they are stopping those who are trying to come here illegally and turning them away.

King: That’s a very interesting question. When I was actually finishing grad school, one of the courses I took was actually Media and International Affairs. It was interesting to see the perspective of the way media actually reports things.

If people step back and they step away from the media that they’re used to … They step back from watching the same shows and everything else and they listen to more independent media, and they start researching themselves, they start looking at what the facts say.

It’s really not hard to find—once you get away from the first five or six pages of a Google search engine, right? Or you go past what the supported or sponsored information is, … you start peeling back that onion and you’ll see that the media is not always friendly to anybody.

When you start looking at the facts, you’ll find that the media skews things to benefit themselves and to support candidates they believe or what they want in office.

We see it here at the local level. We see it at the state level and at the national level. The media is rarely trustworthy and almost all media spins to benefit themselves. Independent media is by far the best way to actually obtain information.

Del Guidice: We were talking a little bit before we got started about some things you’ve witnessed here in this area, when it comes to legal and illegal immigration. Are there any instances or stories that you have that come to mind that really illustrate what’s going on here well?

I don’t know if they’ve happened to you or maybe friends of yours or stories you’ve read in the news. But are there one or two instances [that] you can pull out or stories that you remember that come to mind that make you think, “Yeah, this is a concrete example of what’s happening here in this area or in my state”?

Once you get outside of those areas, you see what a border fence really looks like. It’s not the media fence that is purported on the news. The real border fence is sometimes a railroad tie that’s elevated 2 feet off the ground, sometimes it’s a cattle fence, sometimes it’s barbwire. And those are what the real stories are.

Del Guidice: What is the drug problem like here and is there a drug problem with [illegal immigrants] trafficking drugs over?

So what is that situation like with illegal drugs brought over here in Arizona?

King: The interesting thing about the drug problem here in Arizona is it’s not just illegal aliens. It’s American citizens, as well. They will drive their cars over and the cartels will push the drugs in their cars and they’ll drive them back.

We have American citizens who are arrested here almost daily transporting narcotics across the border. It’s not just marijuana anymore. It’s methamphetamines, it’s fentanyl, it’s heroin, and other opiates. They’re all coming across the border.

Del Guidice: In closing, [are] there any specific few things or even one thing you want to leave with listeners about the border crisis and illegal immigration and why it’s so important for people to be educated and talking about this issue?

King: Illegal immigration … or I should say immigration that’s brought up here by those who would rather come in and not do things the legal way is something that the everyday American citizen needs to take a look at. Watching people and talking to neighbors and friends and family that live outside of the border community. That 100-mile stretch that hits the international border, and that’s not just the Mexican border, that’s the Canadian border as well.

When people can’t see and they can’t rationalize, and they can’t understand what’s going on here, all we really think that people need to do is ask. I’ve taken several trips down to the border with friends of mine to show them that this is what reality is.

Out on the Barry Goldwater gunnery range that’s owned by the Department of Defense, illegal aliens transit that daily. And that’s a federal installation. State lands, federal lands, it doesn’t matter. They will transit. They will find their way here.

We have an immigration system for a reason and if we want to actually address the issue, we have to take away the incentives for [illegal immigrants] to come here. Whether that’s to do American citizens harm, whether that’s to abscond with taxpayer dollars through a variety of programs, or whether that’s to just exist here and send money back to their families. We understand it’s an issue, but it’s not an issue that is as simple as building a border wall.

That’s a great catch phrase, but as I explained to another reporter, border security is like a golf ball. You have one shell on the outside, but there’s so many ways, so many things that are intertwined on the inside. So … our outer shell will be border security, but you have to look at how things are intertwined inside.

Del Guidice: Chris, thank you so much for joining us on The Daily Signal Podcast.