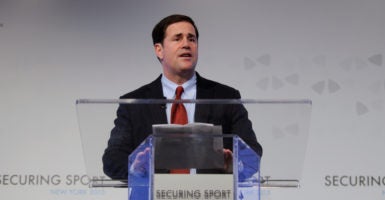 In his State of the State address on Tuesday, Arizona Gov. Doug Ducey took issue with how cosmetology licensing requirements are standing in the way of a volunteer giving free haircuts to homeless veterans. (Photo: Icss/Zuma Press/Newscom)

Arizona Gov. Doug Ducey wants one occupational licensing rule to get a trim after Juan Carlos Montes de Oca was ordered to stop giving haircuts to homeless veterans by the state cosmetology board.

Montes de Oca, a cosmetology student from Tucson, was inspired by a man in London who helped the homeless on his days off. It motivated him to give haircuts to homeless veterans and encourage them to use their clean-cut look and positive spirit to apply for jobs.

Montes de Oca wanted to give back to the community while still practicing his skills in cosmetology school, and volunteered at Camp Bravo, a place where homeless veterans and others gather to find comfort, food, and shelter.

Camp Bravo’s director said Montes de Oca comes in as a friend and resembles a counselor to the people at the camp. “He’s part of the family here,” the director said of the young man in a video interview with the Foundation for Government Accountability, a Naples, Florida-based think tank focused on free-market principles.

All was well at Camp Bravo until Montes de Oca received a letter from the state cosmetology board to cease and desist, because he had not yet graduated from cosmetology school and was operating without a license. The letter requested he appear in court in Phoenix.

When the Republican governor saw the positive impact that Montes de Oca was having in Tucson, he decided to take on the cosmetology board and the required occupational licensing laws.

The Arizona Capitol Times reported a state law requires 1,000 hours of training at a state-licensed school in order to style hair. State Rep. Michelle Ugenti-Rita, a Republican, said cosmetology licenses can cost up to $10,000, adding that not holding one does not pose a public health or safety issues since blow-drying hair does not require scissors or use of chemicals or dyes.

In his State of the State address Tuesday, Ducey noted that a cosmetology license requires “25 weeks [of training], more than an EMT, certified nursing assistant or truck driver.”

Ducey views the cosmetology board as “bullies” and is urging passage of Ugenti-Rita’s bill that would make it easier to obtain a license.

Arguably, the most memorable moment of Ducey’s speech came when he looked at the young man at the center of the controversy and said, “Juan Carlos, you go ahead and keep cutting hair and keep doing the right thing.”