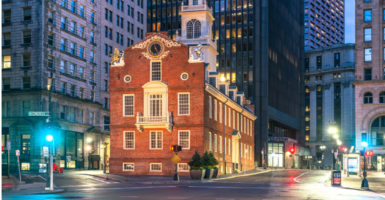 Boston is a notable sanctuary city that for years has refused to cooperate with federal immigration authorities, even when it pertains to potentially dangerous criminal illegal aliens. (Photo: Getty Images)

Immigration and Customs Enforcement officers have arrested an illegal alien living in Massachusetts who was charged with rape and larceny in Boston, and is believed to have been living in the U.S. unlawfully for nearly 20 years.

ICE’s Enforcement and Removal officers arrested Alois Mutare, a 42-year-old Zimbabwean national, on March 2, according to a press release from the agency. The apprehension comes after Mutare was indicted on felony rape charges and released from local law enforcement custody without any notification to ICE.

Boston is a notable “sanctuary city” that for years has refused to cooperate with federal immigration authorities, even when it pertains to potentially dangerous criminal illegal aliens.

“These arrests are just one more indicator of the threat that sanctuary policies pose to our communities,” said Todd M. Lyons, acting field office director for Enforcement and Removal Operations Boston.

“Our officers will continue to arrest public safety threats that are released back to the communities, even as we remain committed to working with our local law enforcement partners to keep communities in the region safe,” Lyons continued.

Mutare, while working as a ride-share driver, allegedly picked up an inebriated 25-year-old woman on Dec. 21 after she spent an evening at the bars, according to local reports. Surveillance footage reportedly shows him helping the woman into his vehicle that night.

The victim—who subsequently went to a nearby hospital—told Boston police that she couldn’t recall what she did after leaving the bar, but remembered a man hovering over her while in a back seat, and she reported experiencing vaginal pain. Financial records show her debit card was used the following morning at a Dunkin’ Donuts, a Target, and two ATMs.

Ultimately, law enforcement was able to use surveillance footage to locate Mutare. He maintains that he had a consensual sexual encounter with the woman, but that no vaginal intercourse took place.

Mutare was arrested by Boston police in December 2019, and later released on bail by Suffolk County Superior Court on March 3.

An ICE investigation discovered that Mutare, while he entered the U.S. legally in 1999, overstayed his temporary visa by nearly two decades.

The agency would have lodged an immigration detainer on him, asking Boston authorities to hold onto him long enough for an ICE officer to assume custody, but local law enforcement never even sent a notification.

“On this arrest, Boston Police did not notify us of his arrest, so we did not have the opportunity to lodge a detainer,” John Mohan, a spokesman for ICE, said to The Daily Caller News Foundation on Tuesday. “Technically this was not a case of a detainer that was ignored only because we didn’t have a chance to lodge a detainer since we were never notified he was arrested in the first place.”

Nevertheless, ICE was able to apprehend Mutare on March 4, one day after he was released from Suffolk County Superior Court.

The Zimbabwean national will remain in ICE custody pending his immigration proceedings, where he is likely to be ordered to be removed from the U.S.

Under Boston’s Trust Act, it is established policy for the city’s law enforcement to ignore ICE detainer requests. The Boston City Council late last year doubled down on this sanctuary policy by adding extra restrictions—prohibiting police from sharing information with the agency, and requiring the city to produce reports of all detainer requests it receives every year.