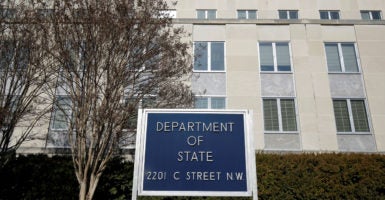 A 2016 law passed by Congress requires the Office of Management and Budget to produce the annual report on State Department contributions to the U.N. (Photo: Joshua Roberts/Reuters/Newscom)

That measure, which became P.L. 114-323, included a requirement that the Office of Management and Budget report annually to Congress on “all assessed and voluntary contributions … of the United States government to the United Nations and its affiliated agencies and related bodies during the previous fiscal year.”

The requirement was included because, while the U.S. has historically been—and remains—the largest funder of the United Nations system, the U.S. only periodically compiled a comprehensive report on those contributions.

This happens because, while most U.S. contributions to the U.N. system come from the State Department and U.S. Agency for International Development, millions of dollars also flow from other parts of the federal government, and the State Department lacks the authority to require other agencies to provide full data in a timely manner.

Thus, State Department reports are less comprehensive than reports by OMB, which has more authority to compel agencies to provide information.

Going forward, Congress has mandated that the annual report be produced by OMB, which should greatly improve transparency and accuracy. Unfortunately, information from previous years will remain obscure unless Congress or OMB take steps to rectify the matter.

There are two main problems that must be addressed.

Thus, a comprehensive accounting of U.S. contributions to the U.N. system for fiscal years 2011 through 2013 does not exist.

(a) Congress asked OMB to compile the reports, not the State Department.

To address these problems, unless OMB chooses to do so voluntarily, Congress should require OMB to submit reports for fiscal years 2011 through 2013, and review and update the fiscal year 2015 and fiscal year 2016 State Department reports to ensure they are comprehensive.