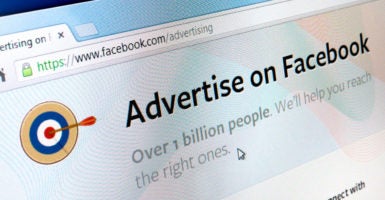 Facebook previously told congressional investigators that it sold $100,000 worth of ads during the 2016 campaign to a suspicious Russian firm. (iStock Photos)

One post, published by a page called “Being Patriotic,” promoted an apparently phony event in Pennsylvania for “Miners for Trump” and advocated coal-mining jobs. Another alleged that former Secretary of State Hillary Clinton has a 69 percent disapproval rate among all veterans and detailed accusations related to the 2012 Benghazi attack and the U.S. Department of Veterans Affairs.

“This ad is nothing short of the Russian government directly interfering in our elections, lying to American citizens, duping folks who believe they are joining and supporting a group that is about veterans and based in Texas, when in fact it [was] paid for in rubles by Russians,” Coons said while addressing Facebook General Counsel Colin Stretch. “Should Facebook be allowed to be a platform that foreign adversaries can use to run political ads, sir?”

“Senator, that advertisement has no place on Facebook and we are committed to preventing that sort of behavior from occurring again on our platform,” Stretch responded.

NEW: These are the first two Russian-bought Facebook ads to be released by Congress. pic.twitter.com/1ThgzYNdTf

Facebook previously told congressional investigators that it sold $100,000 worth of ads during the 2016 campaign to a suspicious Russian firm.

As Axios reporter Sara Fischer notes, that is a very small amount, especially in a two-year time span and relative to the larger, massive political advertisement ecosystem.

“For all it’s the emotional appeal, the idea that Russia was able to change the outcome of the presidential election with a $100,000 Facebook ad buy is absurd. If it were true, then every political consultant in the U.S. would be out of a job,” Richard Bennett, a tech adviser and one of the original creators of the Wi-Fi system, said.

“Hillary and her supporters spent lots of money on social media campaigns, just not as wisely as the Trump campaign. The election turned out the way it did because Hillary not only failed to win the white working class vote, she didn’t even bother to ask for it. Voters don’t like being disrespected.”

Facebook more recently announced that content delivered by Russian operatives with possible connections to the Kremlin “reached” 126 million users. Many are misconstruing what that means by erroneously conflating “reach” with “read.”

It is virtually impossible to know how many people actually saw one of those posts, as many Facebook users are often inundated with content both on the almost never-ending news feed, as well as the features and information provided on the sidebars. Users could have just scrolled past the post, or never even been logged in to be able to see the content in the first place.

And the 126 million figure “equals about four-thousandths of 1 percent (0.004 percent) of content in the news feed, or approximately 1 out of 23,000 pieces of content,” Stretch wrote in official testimony. “Put another way, if each of these posts were a commercial on television, you’d have to watch more than 600 hours of television to see something from the IRA [the Internet Research Agency, which is accused of the dissemination].”

The general counsel for Facebook, as well as Google and Twitter, are currently in the process of testifying before congressional committees. All accepted blame for not doing enough to stop nefarious foreign actors from using their features to stoke polarization in America. In fact, they may even have empowered them with their ad services and offerings. Facebook, for example, allegedly helped advertisers with targeting by offering a template of how it perceives the U.S. population is ideologically split, according to a BuzzFeed News report.

Such a line of thought is playing a part in public officials’ recent clamoring and pushes for a legislative solution. Sen. Amy Klobuchar, D-Minn., pressed the respective general counsels of Facebook, Twitter, and Google during the Senate Judiciary Committee hearing Tuesday to answer whether they would support her recently introduced legislation that would limit their control of the advertisements on their platforms.

Although Russia appeared to be trying to actively foment divisiveness in America, the extent of the Russian-bought ads’ impact, however, is not so clear. Economists at Stanford and New York University conducted a study that showed fake news had virtually no effect on the outcome of the election.