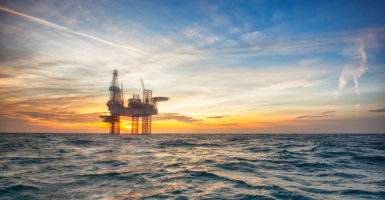 The Gulf of Mexico's Outer Continental Shelf has technically recoverable resources of over 48 billion barrels of oil and 141 trillion cubic feet of gas. (Photo: iStock Photos)

President Donald Trump has vowed to make the U.S. more energy dominant than ever, and the Interior Department took an important step toward that goal this week.

Interior Secretary Ryan Zinke announced on Tuesday that his department is proposing the largest oil and gas lease sale ever held in the United States. In March 2018, the Interior Department will make nearly 77 million acres in federal waters of the Gulf of Mexico available for the lease sale.

“In today’s low-price energy environment, providing the offshore industry access to the maximum amount of opportunities possible is part of our strategy to spur local and regional economic dynamism and job creation and a pillar of President Trump’s plan to make the United States energy dominant,” Zinke said.

Importantly—and unsurprisingly—policymakers in the region applauded the Interior Department’s proposal.

Sen. John Kennedy, R-La., remarked, “This is great news that our oil and gas industry in Louisiana sorely needs. This is the largest sale in U.S. history, and it will create jobs and bolster our state and national economy.”

The Gulf economy thrives in large part because of its energy, petrochemical, tourism, and fishing industries. These industries exist in harmony, not in competition or animosity toward one another. They even have festivals celebrating their symbiotic relationship.

The Gulf is not dependent on energy production, but understands it is an important element in the regional economy and for the entire nation.

The Gulf’s Outer Continental Shelf, covering about 160 million acres of sea, has technically recoverable resources of over 48 billion barrels of oil and 141 trillion cubic feet of gas. And these are likely underestimates, as innovative technologies tend to uncover more natural resources than previously thought.

Regrettably, America’s energy abundance is also walled off by an abundance of regulatory red tape. Inaccessible and onerous regulations have hampered economic growth in parts of the country where energy production is off limits, including the Atlantic, Pacific, and Gulf coasts as well as sea area off the coast of Alaska.

Furthermore, it can take anywhere from five to 10 years for a company to move through the approval process for exploration and production, and there is no guarantee the permit will actually lead to successful extraction.

For environmental activists, though, it’s never the right time to open America’s federal lands and waters to resource extraction.

If prices are low, they claim the energy sector won’t invest in offshore development. If prices are too high, they claim it takes too long for the oil and natural gas to get to the market to have any meaningful and immediate impact on prices.

Telling companies when and where they can invest, however, is not the role of the federal government. The energy industry views oil and gas investments in the long term. Businesses are much better equipped and flexible to deal with changing economic circumstances than shortsighted politicians in Washington.

Congress should require the Interior Department to open all of America’s territorial waters for leasing, exploration, and production and conduct the necessary environmental review and permitting if industry interest exists.

Even in spite of the previous administration’s policies, the energy sector thrived because of production on private and state-owned lands. American families and businesses have benefitted tremendously from more affordable energy.

It’s encouraging to see the current Interior Department finally making up for all that lost time and bad policy.