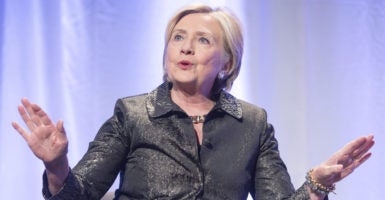 During Hillary Clinton’s tenure at the State Department from 2009 to 2013, she used a private email account and server while conducting State Department business. (Photo: Ryan Remiorz/ZUMA Press/Newscom)

Lawmakers are reopening an investigation into decisions made by the Justice Department in 2016, including those relating to former Secretary of State Hillary Clinton’s handling of classified information.

The items under review, according to the House oversight panel, include:

Gowdy, who took over as chairman of the Oversight and Government Reform Committee when then-Rep. Jason Chaffetz, R-Utah, resigned from Congress in June, is continuing the investigation Chaffetz presided over.

“The impartiality of our justice system is the bedrock of our republic, and our fellow citizens must have confidence in its objectivity, independence, and evenhandedness,” Gowdy and Goodlatte said in their statement. “The law is the most equalizing force in this country. No entity or individual is exempt from oversight.”

It is in the best interest of the American people to review the decisions, the lawmakers wrote.

“The committees will review these decisions and others to better understand the reasoning behind how certain conclusions were drawn,” Gowdy and Goodlatte said. “Congress has a constitutional duty to preserve the integrity of our justice system by ensuring transparency and accountability of actions taken.”