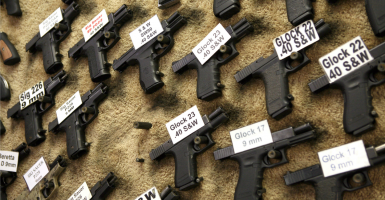 An internal review of the Justice Department’s controversial initiative known as Operation Choke Point found no evidence that agency attorneys intentionally used the program to target legal and legitimate businesses such as pawn shops, gun dealers and payday lenders.

“Based on the results of this inquiry, [the Office of Professional Responsibility] concluded that Department of Justice attorneys involved in Operation Choke Point did not engage in professional misconduct,” wrote Deputy Counsel G. Bradley Weinsheimer, in the report issued July 7.

The investigation did, however, find evidence that Justice Department employees “seem to disparage payday lending practices” and were “clearly pleased” by the effect Operation Choke Point was having on the payday lending industry.

The investigation into Operation Choke Point came at the request of Rep. Blaine Luetkemeyer, R-Mo., who has been highly critical of the program for its alleged targeting of payday lenders and other legal businesses.

In an exclusive interview with The Daily Signal, Luetkemeyer said he was “disappointed” but “not surprised” by the report.

“They focused on the legal actions that were taken by the department, which I don’t quibble with,” he said. “I support their actions from the standpoint that if there’s a bank out there that’s doing something wrong or a group of individuals that are doing something wrong within an financial institution, they should go after them, that’s their job.”

Luetkemeyer said the Office of Professional Responsibility “blew off” what was the intent of his request, “which was to investigate those people whose actions were illegal and inappropriate.”

“For them to not even really address that is really disappointing,” he said. As described by Justice Department officials, Operation Choke Point was “a strategy to attack Internet, telemarketing, mail, and other mass market fraud against consumers, by choking fraudsters’ access to the banking system.”

The concern among Luetkemeyer and other Republicans in Congress is that Justice Department officials used these subpoenas and other Operation Choke Point tactics to pressure banks to terminate relationships with lawful businesses.

As outlined in the report, that concern “largely stems from the fact that attorneys of the Consumer Protection Branch of the Justice Department attached to some subpoenas three documents containing regulatory guidance from the Federal Deposit Insurance Corporation and other federal regulators.”

During a Congressional hearing last March, the head of the FDIC called the decision to make the “high risk” list a “mistake.”

“Clearly there was misunderstanding with regards to the list, which was a mistake on our part,” Martin Gruenberg, chairman of the FDIC, told Congress.

The Justice Department’s review found no evidence that any of their attorneys “intentionally targeted” industries featured on that list by using it in their subpoenas.

Instead, the official responsible for including the “high risk” list in the Justice Department subpoenas said the intention was “to assist the subpoena recipient to understand what we meant by our use in the subpoena of the term ‘third-party payment processor.’”

“This is not something that’s going to go away,” [email protected]

Luetkemeyer said the report is, “quite frankly, to the point of a cover up” because they have “absolutely ignored the facts and refuse to investigate” documented examples of Justice Department employees discussing the targeting of lawful financial practices.

Vowing to continue pushing for his legislation to defund Operation Choke Point, Luetkemeyer said, “This is not something that’s going to go away.”

We’re going to continue to push this until we have a resolution, and a resolution has to be that people stop doing this.