US, South Korea Stand United Against Kim Ahead of Trump’s Asia Trip 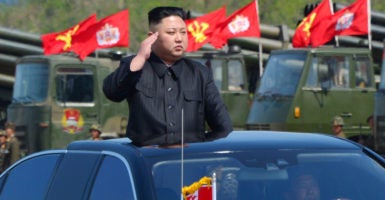 North Korean dictator Kim Jong Un inspects artillery launchers ahead of a military drill marking the 85th anniversary of the establishment of the Korean People's Army on April 25, 2017. President Donald Trump will be meeting with South Korean President Moon Jae-in this November to discuss the nuclear threat posed by the communist country. (Photo: KCNA/REUTERS /Newscom)

President Donald Trump and South Korean President Moon Jae-in could be set to take an international good cop/bad cop approach in handling the North Korean nuclear threat, one expert suggests in advance of Trump’s two-week trip to Asia in November.

“While it’s true many of the things said by President Trump and [North Korea’s] Kim Jong Un [have] raised concerns over the Korean Peninsula, if you think of every attempt we made with [North Korea], it has all failed,” Kim Young-Joon, senior researcher with the Institute for National Security Strategy, said Thursday at a panel discussion at The Heritage Foundation. “Now it’s time to try new things.”

He then drew upon a soccer analogy.

“You can’t all be defenders or a goalie,” he said. “We have to divide the role to win the game. What we are seeing with our two countries is exactly that, I believe. I’m not really concerned about war, but we need to consult each other every step of the way to know where your teammates are and know what role your teammates are playing.”

Trump will be traveling across Asia from Nov. 3 to Nov. 14, and one of the first stops will be South Korea, where the two leaders, both elected in the past year, will discuss escalating threats from North Korean dictator Kim Jong Un.

North Korea also sent a letter to the Australian Parliament that said if Trump thinks he could bring North Korea, “a nuclear power, to its knees, through a nuclear war threat, it will be a big miscalculation and an expression of ignorance.”

Denuclearizing North Korea is the best hope, but the regime might be unwilling to give up its nuclear weapons, said Lee Hochul, a political science professor at Incheon National University in Incheon, South Korea.

“Let’s consider the worst scenario: North Korea’s clear threat to the U.S. or its allies, and the U.S. military reaction escalating into a war,” Hochul said at The Heritage Foundation event, which included American and South Korean experts. “This scenario will cause devastating damages and casualties to South Korea and probably Japan and outlying [U.S.] territories in the Pacific. … But North Korea would be totally destroyed. It may not exist after the war. I think this scenario, nobody wants to see.”

The best scenario, he said, could involve a number of peace negotiations that could require granting the North Korean regime its security in exchange for giving up its nuclear program. A deal could be negotiated bilaterally between the U.S. and North Korea, or through a four-party deal with North Korea, South Korea, the United States, and China, or even a six-party deal that includes Russia and Japan.

“The key question is whether Kim Jong Un is ready to give up his nuclear weapons even with regional security guaranteed,” he said.

North Korean government officials have continuously said they won’t denuclearize, Bruce Klingner, a senior research fellow for Northeast Asia at The Heritage Foundation, said. That creates what Klingner said is an unfounded fear among South Koreans that the United States won’t stick with them.

“I also think, and would emphasize that most significantly, the U.S. has committed its most precious resource, the lives of our sons and daughters in uniform, that we’ve placed in harm’s way to stand shoulder-to-shoulder with South Koreans to defend them against the North Korean threat,” he added.

The United States, under the Trump administration, has sent a strong message to China, with tough sanctions that will affect the Chinese economy that past administrations were reluctant to impose, said Elizabeth Rosenberg, director of the energy, economics, and security program at the Center for a New American Security.

“This is and should be seen as a major shot across the bow in targeting of China as a strong declaratory policy itself and signaling to China that the United States expects, hopes, and encourages that China do more to prevent North Korea’s use of Chinese companies and financial system to engage in proliferation activities and other economic activities,” she said. “Of course, China represents the overwhelming majority, or rather, facilitates and engages with North Korea for the overwhelming amount of foreign trade.”

In the course of future negotiations, she said, parties should be willing to take “yes” for an answer.

But it will take more sanctions to break the stubbornness of the regime, said Anthony Ruggiero, a senior fellow at the Foundation for Defense of Democracies.

“Is North Korea the most sanctioned country in the world? The answer is no. It’s at best fourth,” Ruggiero said.

North Korea is either fourth or fifth, based on how it’s measured, according to PolitiFact.

The history there, even recent history, shows that that part of deterrence has failed.