Our Outdated Nuclear Policy Puts Security at Risk. Here’s How Trump Can Improve It. 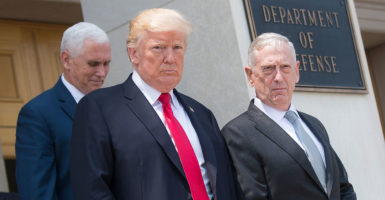 The Pentagon's 2018 Nuclear Posture Review will set forth the military's nuclear strategy and policy goals. (Photo: Dominique A. Pineiro/Zuma Press/Newscom)

Reports have begun to swirl over what the Trump administration’s Nuclear Posture Review will hold.

The Pentagon will likely release the review in the first half of 2018. In the process, the administration can take several steps to put U.S. nuclear weapons policy on a sounder footing.

First and foremost, the Trump administration should recognize the need to rebuild America’s nuclear capabilities. While our nuclear stockpile is aging, our rivals’ arsenals are improving quantitatively and qualitatively. U.S. nuclear forces, designed during the Cold War, should be realigned to better meet the threats facing our nation and allies today.

The previous administration locked the United States into one-sided strategic nuclear weapons reductions, while allowing Russia to build up to limits negotiated under the New Strategic Arms Reduction Treaty.

To make matters worse, Russia embarked on an ambitious nuclear modernization program, which includes building new nuclear warheads—something the United States has not done in over 25 years.

The Chinese have also expanded their nuclear modernization program in order to develop their own nuclear triad of ballistic missiles, planes, and submarines. Meanwhile, U.S. reductions continue to proceed as if we lived in the alternate, more benign reality envisioned by the 2010 Nuclear Posture Review.

The next Nuclear Posture Review should not only account for the growing numerical strength of our rivals’ nuclear weapon arsenals, but also their bellicose international behavior.

The 2010 Nuclear Posture Review declared that the U.S. and Russia were “no longer adversaries,” despite Russia having invaded Georgia just two years prior. Russian President Vladimir Putin has continued this pattern of aggression by invading Ukraine in 2014 and undermining U.S. interests around the world.

The Trump administration must continue to modernize U.S. delivery platforms, many of which are several decades beyond their original service lives.

Even the Obama administration recognized that we must “permit foresighted actions that may reduce, in the coming decades, the chances for surprise and that buttress deterrence.”

The administration should not rule out yield-producing experiments by policy. Such a decision ought to be the product of technical judgment by those who care for the U.S. nuclear stockpile on a daily basis.

The administration must also address Russia’s violations of the Intermediate-Range Nuclear Forces Treaty. The U.S. continues to be bound by the treaty while Russia blatantly violates it. This further emboldens the Russians to disregard their other arms control obligations.

Leaving the Intermediate-Range Nuclear Forces Treaty would clearly convey that the Trump administration is no longer willing to put up with Putin’s disregard for U.S. security interests.

The United States must maintain a modernized nuclear arsenal capable of deterring our nation’s adversaries and those of our allies. The security of over 30 countries around the world depends on it.