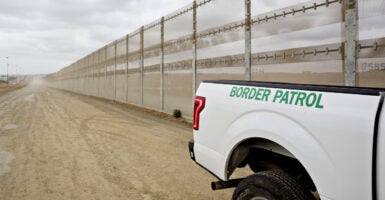 If President Biden gets his way, the federal government will not spend one penny in 2022 on planning or constructing a "physical barrier system" at the border. Pictured: A border fence stands along the U.S.-Mexico border. (Photo: Daniel Acker/Bloomberg/Getty Images)

President Joe Biden has now revealed there is at least one area in which he is a fiscal conservative: When it comes to providing the infrastructure needed to secure the border, he wants to spend far less than the government currently spends.

His administration has presented Congress with a Department of Homeland Security budget proposal that calls for slashing spending on what it calls “Border Security Assets and Infrastructure” by 96%.

What exactly is Biden cutting?

Biden’s DHS has presented Congress with a 562-page “overview” of its fiscal year 2022 budget proposal for Customs and Border Protection. The explanation for its “Border Security Assets and Infrastructure” plan is presented on pages 326 through 350 of this document.

In the past two fiscal years—as reported in Biden’s proposal—the Border Wall System Program has been the most significant of these. “This investment,” it says, “includes real estate and environmental planning, land acquisition, wall system design, construction, and construction and oversight of a physical barrier system.”

Now, if Biden gets his way, the federal government will not spend one penny in fiscal year 2022 on planning or constructing a “physical barrier system” at the border.

“Integrated Fixed Towers” are the next item in DHS’ budget proposal for border security. “This investment,” according to the proposal, “provides automated, persistent wide-area surveillance for the detection, tracking, identification and classification of illegal entries in threat areas where mobile surveillance systems are not a viable and/or long-term solution.”

How much does Biden want for this piece of infrastructure? Nothing.

In fiscal year 2020, Congress approved $1,142,000 for these towers. This fiscal year, it approved nothing. Biden wants to make sure it approves nothing again.

How much does Biden want for this piece of infrastructure? Nothing.

In fiscal year 2020, Congress approved $40,740,000 for these surveillance systems. This fiscal year, it approved nothing. Biden wants to make sure it approves nothing again.

“Mobile Video Surveillance System” is the next item. “This investment consists of sensor equipment mounted on a telescoping mast of a light-duty pickup truck,” the proposal says. “MVSS can be rapidly deployed to provide the best visual range for surveillance of several miles and provide situational awareness to the [United States Border Patrol].”

In fiscal year 2020, Congress approved $14,800,000 for these systems. This year, it approved nothing. Biden wants nothing again.

“MVSS-M2S2 Modular Mobile Surveillance System” is the next item. The proposal explains that the “M2S2” is “the successor to the MVSS investment” and “consists of Non-Developmental Items (NDI)/Commercial Off the Shelf (COTS) surveillance systems based on a light truck, with radar and camera sensors, and backhaul communications capability.”

This year, Congress approved $15,000,000 for this system. How much does Biden want for it in the coming fiscal year? Nothing.

Finally, there are the “Border Security Assets and Infrastructure End Items.” “These procurements,” the proposal says, “include funding for multiple technologies and assets for the [United States Border Patrol].” Congress approved $77,106,000 for these in fiscal year 2020 and $123,000,000 in fiscal year 2021.

Indeed, that $54,315,000 for this one category equals all of the money Biden is requesting for “Border Security Assets and Infrastructure” in fiscal year 2022.

At the same time, Biden is calling for $655,000,000 to fund “construction modernization” of CBP’s “land ports of entry,” where people come to the United States legally.

Yes, Biden wants to cut $1,458,685,000 from federal spending on border security assets and infrastructure aimed at stopping illegal border crossers while increasing spending by $655,000,000 on formal ports of entry.

“First, the president’s budget invests in a secure border,” Mayorkas claimed. “It directs $1.2 billion toward more effective and modern port and border security, including a $655 million investment toward modernizing our land ports of entry, another $47 million to integrate Customs and Border Protection detection capabilities and robust investments in border surveillance technology.”

“There is no request for additional border wall construction,” Mayorkas said.

“You’re not providing yourself with the tools you need to be able to allow the Border Patrol to do their job,” Portman said.

He is right. Biden will not secure the border.