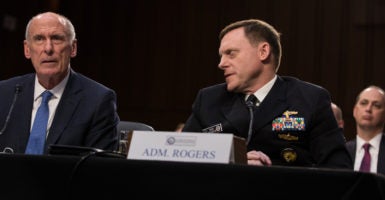 An Islamic State operative encouraged his followers on social media to carry out attacks in Europe and the United States, posting names and addresses of U.S. soldiers and writing: “Behead them in their own homes” and “Stab them to death as they walk their streets thinking they are safe.”

The ISIS operative, Shawn Parson, could not have been killed in Syria in 2015 without what is known as Section 702 of the Foreign Intelligence Surveillance Act, FBI Director Chris Wray said Friday during an event at The Heritage Foundation.

“These are real-world consequences,” Wray told an audience at the think tank’s Capitol Hill headquarters. “Those are American servicemen and servicewomen he’s talking about, and Section 702 helped us break that network, identify the people who he was in contact with.”

The Trump administration is stressing the need to reauthorize Section 702 of FISA. That section, which expires Dec. 31, authorizes the government to target non-U.S. persons outside the United States in order to acquire intelligence.

Wray said the same program allowed the FBI to stop a terrorist attack on the New York City subway system in 2009.

However, some in Congress have raised concerns about Fourth Amendment protections against unreasonable searches and seizures, and about adequate oversight of intelligence gathering done by the National Security Agency.

Wray contends that law enforcement and intelligence, at the recommendation of the 9/11 Commission, worked to tear down walls to better connect dots to stem future terrorist attacks in America and elsewhere.

“Unfortunately, some of the potential amendments that we’ve heard about as part of this reauthorization discussion strike me as eerily similar to rebuilding walls like we had before 9/11,” the FBI director said. “It’s like watching well-intentioned people positioning bricks back in the walls again, perhaps growing complacent from the fact that we haven’t been attacked again.”

Sens. Rand Paul, R-Ky., and Ron Wyden, D-Ore., have vowed to “fight tooth and nail” for major reforms to the law, casting a critical eye on Section 702 for lacking transparency.

The two senators wrote in an NBCNews.com oped:

FISA absolutely needs to be reformed and made to comply with the Constitution. The data collected under Section 702 is gathered under an almost limitless standard. We tolerate that standard because the targets are not U.S. citizens and are not located on American soil, even though they may be communicating with Americans. A constitutional problem arises, however, when we allow the intelligence community and domestic law enforcement to search and use the data collected on Americans without constitutional protections. Reform of FISA needs to prevent these searches and the use of this data in domestic crime. Without these reforms, the program does not comply with the Fourth Amendment.

Without the Section 702 program, the United States would not have had the information last year to track down and kill Haji Imam, the No. 2 ISIS leader, Adm. Mike Rogers, director of the National Security Agency, said at the Heritage event.

“Had it not been for 702 authority, after nearly two years of trying to find him, after an extended period of a multimillion bounty on his head, it was only because of 702-generated authority, or insight, that we were ultimately able to find him,” Rogers said.

Safeguards are in place, he said.

“The law is very specific to prevent us from indiscriminately collecting information,” Rogers said.

The unintended errors that have taken place throughout this program, we keep track of everyone of these, we release this to the public, to the oversight committees, and the error rate is significantly below 1 percent. I can’t find another agency in government with an error rate of 0.43, 0.51, unintended. Throughout the life of this authority that we have, we have not found one intentional breach, one intentional misuse of this authority.